Harnaaz Kaur Sandhu wins Miss Universe 2021 after 21 years leaving every Indian Super proud. The 21-year-old model won 70th Miss Universe 2021 held in Eilat, Israel. The competition was tough for Sandhu as she was competing  against the beauty of South Africa, Lalela Mswane and Paraguay, Nadia Ferreira. Ever since she won the crown, people are googling everything about her. Here, we have compiled everything that you need to know about this young girl.

Sandhu brought the crown home after 21 years after Lara Dutta, who won the title in the year 2000. Former miss universe Andrea Meza from Mexico crowned Harnaaz Kaur Sandhu at the event and the universe was watching Kaur winning the title live as the event was broadcasted in 160 countries across the globe.

Who is Harnaaz Kaur Sandhu?

Harnaaz Kaur Sandhu is a Chandigarh-based model and also tried her hand in acting. She starred in films like Bai Ji Kuttange and Yaara Diyan Poo Baran and both are scheduled to release in 2022. She is a strong supporter of women’s rights and she is highly inspired by Priyanka Chopra Jonas. The new miss also possesses hobbies like dancing, yoga, cooking, playing chess, and horse riding.

Harnaaz commenced her modeling career as a teenager with the Times Fresh Face pageant in 2017. She had won the title Miss Chandigarh 2017 and Miss Max Emerging Star India 2018. After getting crowned  as Femina Miss India Punjab 2019, she headed to compete in Femina Miss India. Well, she had lost the title of Femina Miss India 2019 but made it to the top 12. Sandhu was crowned as Miss Universe India 2021 in October to represent India at the mega event, a three-hour-long grand finale in Israel.

Answers that won the hearts of Jury

Being a nature lover, Harnaaz Kaur Sandhu left the panelist of Miss Diva impressed  with her view on nature conservation, climate change, and global warming.

Answer that made her won the crown

In the top 5 Q&A round, Sandhu was asked, “People think that climate change is a hoax. What would you do to convince them?”

Her quick reply was, “My heart breaks to see how nature is going through many problems, it is all due to our irresponsible behavior, and I totally feel that this is the time to take action and talk less. Because our every action could either, kill or save nature. Preventing and protecting is better than repenting and repairing. And this is what I am trying to convince you guys today,” said the miss universe 2021.

Harnaaz Kaur Sandhu gave a beautiful and elaborate answer when she was asked, “What advice would you give to young women watching on how to deal with the pressure they face today?”

The 70th MISS UNIVERSE Competition is airing LIVE around the world from Eilat, Israel on @foxtv pic.twitter.com/wwyMhsAyvd

Referring to every woman, she said, “The biggest pressure the youth of today is facing is to believe in themselves. To know that you are unique, that is what makes you beautiful. Stop comparing yourselves with others and let us talk about more important things that are happening, worldwide. This is what you need to understand. Come out, speak for yourself because you are the leader of your life, you are the voice of your own. I believe in myself and that is why I am standing here today.”

20 Quotes by Stunning Scorpion Sushmita Sen on Love & Life that every woman should read!

This Indian beauty is also pursuing her Master’s degree in public administration. Before Harnaaz, only two Indians have won the title of Miss Universe. Actor Sushmita Sen in 1994 and Lara Dutta in 2000. 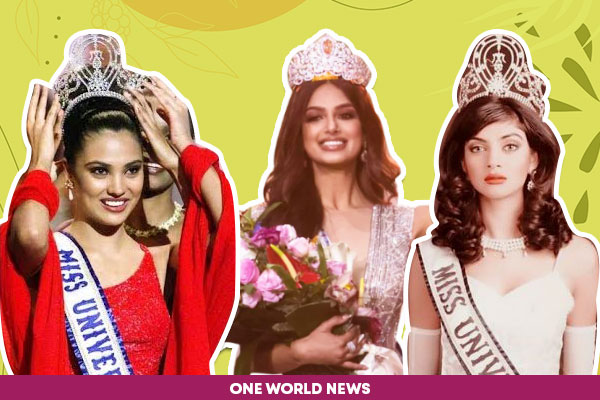 The rise and fall of Chanda Kochhar