The border-tension between Sudan and Ethiopia has increased in recent days despite diplomatic efforts to diffuse a security crisis. Both the Ethiopian militias and Sudanese troops are assembling forces at the shared border of both countries.
The border tension adds more pressure on the transitional military-civilian government of Sudan as they are struggling to establish democracy and rule of law in Sudan. The country is already dealing with the ill healthcare system amid the global pandemic coronavirus.

What is the problem?

Ethiopia and Sudan share a common boundary of about 1,600 km which was drawn following a series of treaties between the two countries and the colonial powers of Italy and Britain. However, like LAC, this boundary to lacks clear demarcation lines. 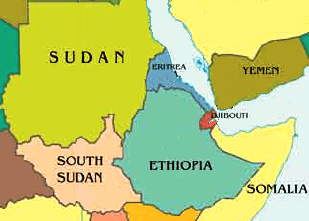 Al-Fashqa area in Sudan which covers about 600 km of the total boundary, is a rich fertile land for agricultural works. Ethiopia has been sending its farmer to plant crops here for decades.
Former President of Sudan, Omar al-Bashir always ignored the territorial incursion of Ethiopian farmers. But the new transitional authorities initiated talks with Ethiopia to withdraw their farmers from reaching Sudan.
Sudan later deployed its troops near the al-Fashqa border after nearly 25 years. The military troops vowed to protect the territory and the citizen of its country.

Recent clash at the border

Recently a cross-border attack took place near the al-Qadarif in which one Sudanese soldier and a child died. A soldier and three Sudanese civilians were wounded. The attack started after an Ethiopian militia group allegedly penetrated Sudan’s border and fetched water at the Atbara river. One Ethiopian militia also got wounded during the border attack.
It is the first time in 50 years that Sudan and Ethiopia are involved in an open-clash. The clash has come just before the two countries were preparing to meet at Khartoum, Sudan’s capital for the second round of talks to resolve the border dispute.
Read more: Bihar Doctor claims to have found preventive medicine for COVID-19, asks PM and WHO to test
Some experts believe that the tension between the two countries might have increased due to Ethiopia’s Blue Nile dam dispute between Sudan, Ethiopia, and Egypt. It is also believed that Egypt might have played a secret hand in the border-clashes between two countries.
The border-clash has attracted wide support to the Army of Sudan among citizens after a long dispute between pro-democracy protestors asking for full civilian rule and accusing the army of being involved in the massacre of protestors on 3rd June.