Mental health is not something that is affecting one particular gender. Men and women both are susceptive to having mental health issues. Where women are naturally emotive, men are subjugated to fit in the social norm of the idea that “men don’t cry”, “men should be strong” and the like. Yet, for women, mental health is not just associated and directed by the socio-cultural gender roles women are supposed to serve but also the hormonal changes that women go through every month and even during the time of their pregnancy and early motherhood.

Khushii tells us that “Women are considerably more emotional, they are likely to feel things more easily, more freely and are more expressive as they have been brought up that way. If not anything, they have not been bound to not feel and emote more to things.

Along with that, hormonal changes make them more susceptible and vulnerable to feeling sad and emotional and can further lead to poor mental health. The other aspect of it is the changing roles of women in society.”

Where the changing times have to lead to the opening of new opportunities for women, now is the time when at least a section of women can think of choosing a profession they want to be in and at the same time, they choose to be a homemaker too. Where this idea of women having the liberty to make a choice is good for their mental health, it also adds responsibility to women. When they are supposed to juggle between their work-life and their duties as a homemaker, in that situation, they might get stressed and prone to prolonged sadness. With the changing roles, women also try to fit into the idea of ‘strong women are strong when they are less emotional’. And, controlling emotions itself leads to poor mental health.

Read more: How do we see women with sexual desires? 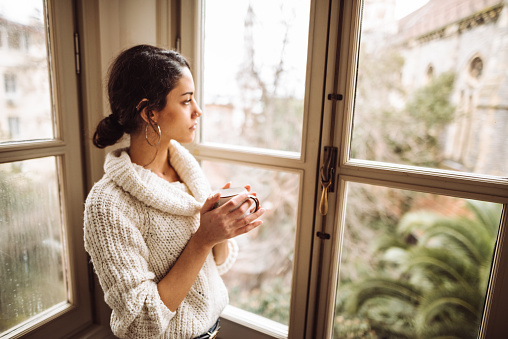 The female body functions very differently than the male body. The female body consists of two sex hormones, estrogen and progesterone. The third hormone, testosterone, which is a male hormone is also required in very small amounts by the female body.

Now, when the female body undergoes the process of menstruation every month and throughout the 28 days cycle, the hormonal changes keep on occurring. These changes can often lead to PMS (Premenstrual Syndrome) that many women get about a week or two before their periods. During this, they might feel mood swings, absorbed in overthinking, bloating, headache etc. Researches showed that more than 90 percent of women face this.

Secondly, mental health gets affected by Polycystic ovary syndrome (PCOS). PCOS is a state where the period cycle gets disturbed along with other physical changes in the body including weight gain, hair loss, excessive growth of hair on the skin, acne etc. Where one reason behind it can be the increase in the male hormones in the body, the other can be stress and depression. In fact, Mental health and PCOS are affecting vice versa. Where stress can lead to PCOS, PCOS can also lead to severe mental health issues because of the hormonal and the physical changes in the body affecting psychology.

Third and the most changing phase of women’s life is a pregnancy where not just a massive hormonal change occurs in the female body but also a major change in lifestyle happens. Where the period of pregnancy gives way to mood swings, overthinking, and eating disorder, the postpartum depression (depression that occurs after childbirth) is even very common. It is seen that one in every three mothers go through postpartum depression and almost 60 percent of mothers deal with depression post-childbirth.

With pregnancy and motherhood, society puts extra pressure on the women for the wellbeing of her child. With the image of the mothers as givers, the society subjects them to think and overthink about themselves as mothers and this gives way to more insecurities in personal and work life.

How women can improve their mental health

Practicing Mindfulness – To think of the past, to plan for future but to not get attached to it. Just live in the moment. Instead of conditioning your happiness, be happy with whatever you have.

Self-love – An empty cup can’t pour anything. The idea of women or mothers being one to sacrifice all the time is not the right idea. Love yourself before expecting another person to love you or just giving love to others. Give time to yourself and love yourself first.

Practicing Gratitude – Practicing gratitude can be as simple as just a simple act of identifying your blessing. Counting from the smallest things you  get which can start from the fact that you are getting fresh air to breathe, you have had good sleep last night to you getting good food to eat.

There can be other things too including making new friends, talking to people, experiencing new things, eating healthy, etc. The first step is to love oneself and take care of what their mind thinks. Poor mental health can even lead to bad physical health including insomnia, weight gain, headache, mood disorders, eating disorders, relationships, metabolism and so on and it won’t even let you know when it has affected you. So, one needs to really take care of their mind and mental health for the sound functioning of their body.

How to deal with patriarchy and gender roles in your family? Is fighting on such issues a wise option?

Do you want to deal with the gender-based issues in your family and wonder how to do it? “Toxic men

Two recent researches indicate that Covid-19 affects the brain   In the early days of the coronavirus pandemic, doctors struggled

Is the use of virtual services here to stay?   The year 2020 has truly been unprecedented in so many

12 universities come together to pledge for carbon-neutral campus