Why am I a Hindu? Let us understand ‘Hinduism’

The book, “Why I am a Hindu?” by Congress MP Shashi Tharoor is a balanced book on religion as one can hope to write in these tumultuous times. He writes that it is important to make people aware of what actually Hinduism is and how in the contemporary world it is being distorted by political parties for increasing their vote banks.  The book promotes the idea to all Hindus that plural is the only way and plural is what they should continue to be. Tharoor starts with explaining the Hinduism he believes in, then reaching out to the Hindu way as interpreted from various Hindu scriptures and Vedas. 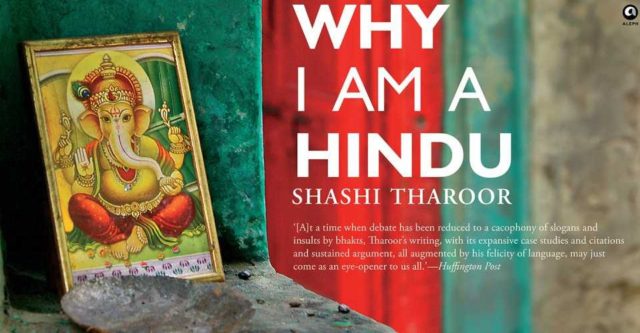 Hinduism is a civilization

Tharoor in his book Why I am a Hindu writes that Hinduism is a civilization and not a dogma. Hinduism is the culture of people living in India, no matter what religion they propagate. He writes about how Hinduism promotes the idea of tolerance and acceptance and expect the same from its followers. He also commends the flexibility of Hinduism. How there is no set of belief that one has to follow to be a Hindu? Not even a belief in god, unlike other religions. He writes about how the Indian culture has absorbed the diversity of cultures and beliefs (Jainism, Buddhism) that it came across. Thus, respecting every faith and giving them space rather than establishing its rule over them.

Tharoor also questioned the Hindu customs and also praised the great souls of Hinduism, then he gradually sets the mind of the reader towards politicization of faiths and the rise of Hindutva and the radical right wing’s ideology, where he talked about the holy cows along with the uses and abuses of Hindu culture and history.

Therefore, it’s a complete package and a must read for every politically curious Indian, and not only to Janeu-dharis. Tharoor’s writing is an expansive case study and sustained augment which may come as an eye-opener for all of us.

10 Good Reasons to pursue a career in Indian Railways