We are aware of COVID- 19 cases and how it has destabilized most of the country. By 27th February, there were 79,251 positive cases in China (what Chinese officials claimed) and 4351 outside China. Just after a month, the situation has drastically changed as China reported hardly 3000+ Cases and outside China, 5 lakh positive cases have been registered so far in a dramatic change.  WHO declared the deadly virus a pandemic almost on 11th March but were they too late in doing so?

Let’s understand the role of the World Health Organization for public health.

It is an established fact that the SARS CoV2 originated in Wuhan wet market, after many news reports, claimed so. Many pneumonia cases were reported in late October in the same province which local government of China didn’t tell anyone. Doctors who wanted to publish the information were silenced. Chinese reported WHO about the disease on 31st December almost after two months of the outbreak, until then lakhs of Chinese migrated to other places taking virus along with them.

The world media was informed about the deadly outbreak around 8th January, more than a week later when WHO was informed by China.

How WHO failed to contain the coronavirus reaching in other countries?

Official Tweets and evidence show the Director-General of WHO Dr Tedros Adhanom Ghebreyesus was favouring China in various aspects. It all started when WHO tweeted on 14th January (no clear evidence of human to human transmission of COVID- 19).

Preliminary investigations conducted by the Chinese authorities have found no clear evidence of human-to-human transmission of the novel #coronavirus (2019-nCoV) identified in #Wuhan, #China??. pic.twitter.com/Fnl5P877VG

By mid-January, India and the USA started restricting flights from China after seeing hundreds of people getting affected by the deadly virus. At the time, WHO officials tweeted (Travel advisory doesn’t make a sense). 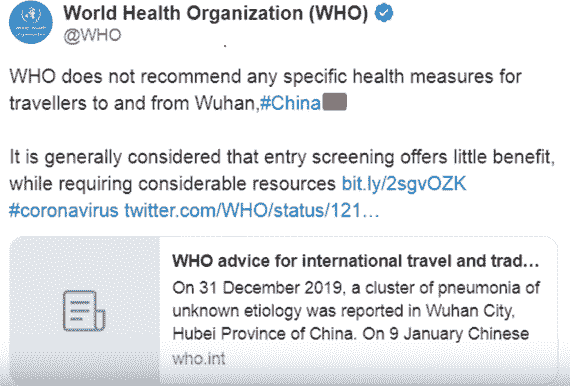 Dr Tedros Adhanom Ghebreyesus visited China on 28th January and praised the leadership of China by saying that China has set an example of outbreak management and others should learn from it. All the misinformation, lies, fact-hiding was ignored by WHO. COVID-19 should have been declared Pandemic in February only but it took more than 2 months for WHO, since the first information by China,  to declare it a pandemic. Other countries didn’t take it seriously and kept the travelling open as they all were believing WHO, which said that there is no need for the travel ban.

Read more: How Indian businesses are helping to stop the spread of Coronavirus?

China’s journey from 1.66 trillion economy in 2003 to 14 trillion in 2020 banks on big diplomatic decisions during this decade. Presently, the Director-General of WHO is Dr Tedros Adhanom Ghebreyesus who is a former health minister of Ethiopia. Same Ethiopia, where China is investing in millions. China is working towards a dream project of road and Infrastructure, known as a part of one belt one road initiative and also they are funding WHO projects in Ethiopia. China’s 86 million dollar contribution to WHO and various investments in Ethiopia has made things worse for the world. Dr Tedros Adhanom ignored many aspects to favour China. This political greed has led the world to a point where thousands of people are fighting for their life and billions are stuck inside their home.

There has been a war for the name of Covid-19 virus too. While the world is calling it a Coronavirus COVID-19, US President Donald Trump has time and again called it a Chinese virus. There are various examples of viruses being named after its origin place. Hanta Virus is named after a place Hanta, South Korea, Ebola Virus is named after the Ebola River in Africa and many more. So, referring the present virus as Wuhan virus won’t be wrong but, WHO ignored the fact and named the virus SARS CoV2 (COVID- 19).