World Toilet Day 2020: Do you know India is the home to 5 million sanitation workers? They risk their lives to clean our mess. Can we show some empathy?

Every year World Toilet Day is celebrated on November 19. The day celebrates the importance of toilets and raises awareness about the 4.2 billion people living without access to safely managed sanitation. The theme for 2020 is Sustainable Sanitation and Climate Change, keeping in mind that climate change is getting worse. Flood, drought and rising sea levels are threatening sanitation systems. It is important that everyone should get clean water and handwashing facilities to stop the spread of deadly diseases such as COVID-19, cholera and typhoid.  2020 has been a very tough year and one of the most important activities this year is ‘Washing hands regularly’. To the immense surprise, a lot of people do not have access to clean water which makes the situation alarming. This year, we truly realized the importance of hygiene and cleanliness. And 2020 is the year dedicated to Sanitation Workers who risked their lives to stop the spread of the Corona Virus.

Life of a sanitation worker in India

Notably, India is the home to five million sanitation workers who clean garbage, public toilets, and sewers. They come in direct contact with human waste and toxic gases which makes them vulnerable to many chronic diseases. With the spread of Corona Virus, they are at a higher risk.  According to a survey, most of the workers were without the necessary precautions and health insurance before the onset of the Pandemic. When India was hit by the Pandemic:

Notably, the situation is dire for the manual scavenger- workers who manually remove human waste from latrines. As per the data by government, 1,82,000 Indians do such work, while human rights group says this number is far more than that. It has estimated the number upto 770,000.

In the year 2013, the prohibition of Employment as Manual Scavengers and their Rehabilitation put an end to this practice.  Shockingly, very few people involved in this practice are aware of this fact. A National survey was conducted in 18 states, a total of 48,345 manual scavengers were identified till January 31, 2020. According to the data collected in the year 2018, 29,923 people were engaged in manual scavenging in Uttar Pradesh, making it the highest in any city. Well, the numbers are alarming. And what’s even more saddening, these people are not given any kind of health security. They are not respected and are often mistreated by the public. Take a closer look at the situation:

According to a study conducted by WaterAid India, it is estimated that sanitation workers die every five days in India. They are exposed to different kind of infections that put their lives on risk. In fact, the family members of sanitation workers suffer too because of the stigma attached to the job and the health consequences.

Every year we celebrate World Toilet Day to celebrate the importance of using it. But have you ever thought about the people who clean it? This year, I decided to speak to some of the sanitation workers. I live in Preet Vihar, Delhi. A couple of days back, I went to a garbage dump yard near my place. It was the day after Diwali. I saw people sitting there, they were having their morning tea. Honestly, I was not able to even stand there. I asked one of them – Yeh Yahan daal doon? One of them replied – “Haanji madam bilkul”. She passed a smile and asked me Diwali de do?  To which I replied, “Aap ghar aakar le jao, mai pass mai rehti hoon.” I thought to strike a conversation with them. They were happy and cheerful people just like you and me, yet they are treated as untouchables and do not get respect at all. Kamla ( one of them) told that she starts her day at 4: 00 am in the morning. At 6 am , she reports to her office. They often have their breakfast in an area filled with garbage. She said – “ Hamara toh kaam hai aur usey hume koi dikkat nhi. Par log bilkul izazzat nhi dete. Akhir hum bhi toh insaan hai, aap logon ka kuda saaf karte hai. Zyada kanoon wagreh toh pta nhi hai, bas chahte hai ki log hamara kaam n badhaye aur thodi izazzat de diya kare.” She wasn’t unhappy from her work. She said she loves to see the city clean. All they want is – Respect. But we aren’t able to give them respect. We actually lack humanity. Giving some extra cash to them on festivals and treating them with respect will not do any harm to us, but who cares?

Can you imagine a day without them? Will you be able to do their work? No, right? So next time when you litter at roads –keep in mind that you are making someone’s job miserable. Even if you are not thankful to them, at least be responsible. 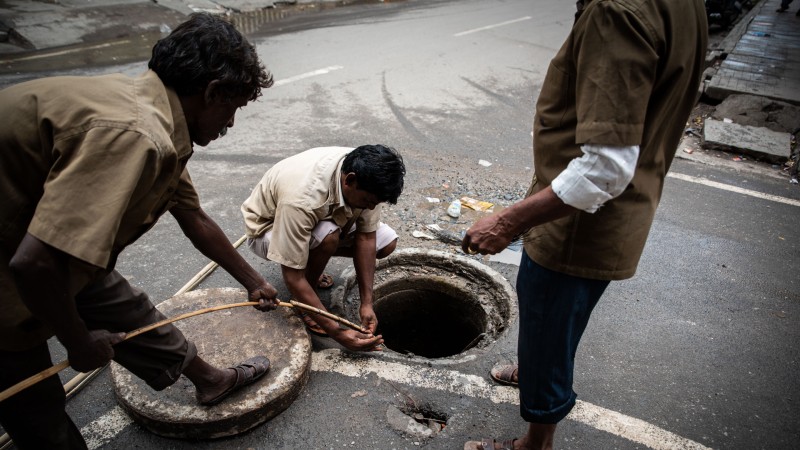 Here are some facts that you should know before you mistreat any sanitation worker :

·  Here is a video that you shouldn’t miss

They are not privileged like you and me and that’s why they are doing this work. You and I don’t have the hearts to clean someone else’s mess.  So the one thing you can do is – Don’t litter! Educate others around you and be more sensitive towards these superheroes.

Child Actors from Hindi Cinema who are Everyone's Favourite

Meet The People Behind Good News Of The Week

What happened during violence in Assam? Explained Here.