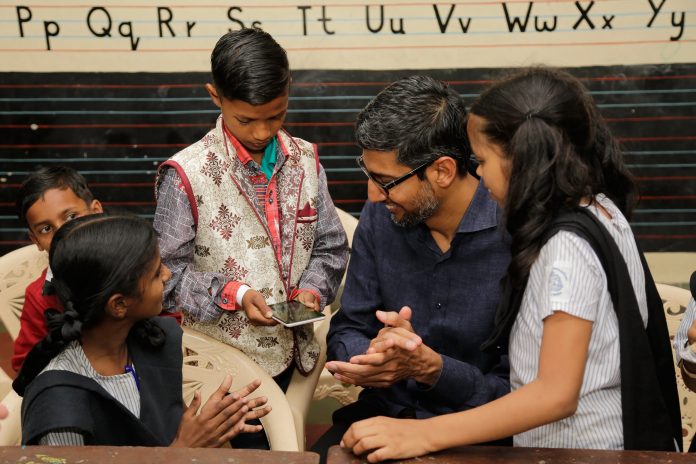 Good news surfaced for all the Indians as India’s Sundar Pichai was declared as the CEO of Alphabet. Alphabet co-founders Larry Page and Sergey Brin stepped down from their top roles to make way for Sundar Pichai who is CEO of Google since 2015. Alphabet is the parent company of Google. Now, Pichai (47) will manage both Google and Alphabet. Brin and Page will remain members of the company’s board.

Brin and Page announced in a letter to the company employees, which also included a statement from Pichai. This move is being considered as a significant shakeup in the technology-giant company. Both the founders said that Alphabet is well-established & Google and ‘other bets’ are operating effectively as independent companies. They said that it is the right time to simplify our management structure.

I’m excited about Alphabet’s long term focus on tackling big challenges through technology. Thanks to Larry & Sergey, we have a timeless mission, enduring values and a culture of collaboration & exploration – a strong foundation we’ll continue to build on https://t.co/tSVsaj4FsR

Mr Pichai is an IIT Kharagpur graduate and has spent 15 years at Google. He rose to fame while leading the development of Google’s Chrome Browser. He later led product engineering and development across all of Google’s services for a year.

Read more: How to balance Freelance projects with a Full-time Job in India?

As the news spread, Indians across the world congratulated him on social media. A lot of them talked about how he made India proud and showed the upcoming generation how to dream big and achieve it. He started trending on Twitter and dominated other Social Media platforms too.

When #SundarPichai was asked at his job interview what he thought of the newly launched Gmail, he admitted that he didn't know what it was.

Great leaders don't have to have all the answers, all the time. They need the courage to understand & admit that they don't know it all.

#SundarPichai is going to Become the CEO of Parent Company #Alphabet .
Congrats @sundarpichai
We Indians 🇮🇳 are proud of you and it makes us feel so happy that you are from India too🇮🇳🇮🇳🇮🇳
All the very best for your New innings.🙏#Google #SundarPichai pic.twitter.com/feZ5suLgDQ

India’s most robust export product is probably the ‘Global CEO.’ It’s now a universal perception that Indian executives are leadership material. If only there was some way of monetising these ‘exports,’ India would have a perpetual balance of payments surplus! 😊 https://t.co/y1n4EZeCaW

From learning alphabets in Jawahar Vidyalaya to leading "#Alphabet", one of the most valued tech companies. 😇

Congratulations @sundarpichai. You are an inspiration to all.

Wishing u all the best! Special mention to #LarryPage & #SergeyBrin for this gracious decision.🙏 #Google https://t.co/GcK9gAxJKd

So @sundarpichai is now head of #Alphabet in addition to #Google. What a career. Delighted and proud. What peak is there now to climb!

What a news to start up your day, the CEO of @Google #SundarPichai now becomes the CEO of #Alphabet as well. Just wow. 😮👏