‘Raising awareness campaigns for menstruation in Ranchi is a fight with people’s psychology and rigidity’ – Shivangi. Know about this woman spreading awareness about menstrual health

It is always great to see women fighting for themselves and their community.  Meeting Shivangi, a woman spreading awareness about menstrual health is a similar kind of enthusiasm. A dentist by profession and an activist by actions. Shivangi is a doctor from Ranchi, Jharkhand. Right now, she is based out of Durg, Chhattisgarh. Born and brought up in a family and a society that is conservative enough, where the man of the family is literally treated as the king of the family, she told us that she always had the grit to change people’s mindset, change their view of a man and a woman, and that is what she has been trying to do.

She tells that in her family, where her mother herself is a doctor found it difficult to call out loud, words like menstruation or periods, so, it is totally an achievement for her, and for her society if her initiative could make a small difference. Along with how she created awareness about menstrual health, she pulled off another campaign to help people deal with addiction to tobacco.

Well, we had a small chat with Shivangi, and here is what she said –

1. Tell us about the initiatives and the campaign you pulled off for menstrual hygiene

I was always good at public speaking so I tried to influence people by making videos on menstrual hygiene products and also started campaigns for anti-tobacco programs. I started from my home. I discussed with my brother who is 13 years old, my mother was first not in a state to allow me to have a discussion with my brother regarding periods. But somehow I managed to make her understand and now is the change that my brother used to do household chores when I Or my mother is in a period’s pain

Read more: From Bra Strap to the slightest corner of their cleavage: Women’s clothing and its relation to slut-shaming 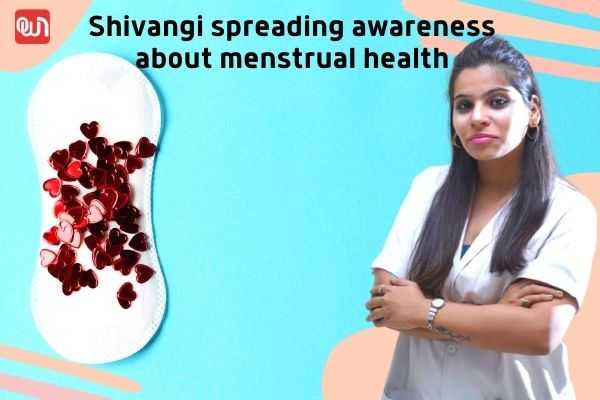 2. In this campaign, what were the challenges that you faced?

I essentially wanted to start this campaign when I was in my college. But there, the head of the institution completely denied the permissions for the same. In fact, I was threatened and warned to not influence and brainwash people’s minds about a topic like this that is in a taboo zone. Then I used my personal space, my social media platform to make videos.  And it was liked by many influencers and people along with the college people and the ones who were really against it. They not even supported me to conduct such a campaign but also asked me to inspire more and more people around me.

3. You also worked on an initiative to help people get over their addiction to tobacco. What was that thing that really inspired you to work on the initiative that you took to regulate the consumption of tobacco?

While I was working for menstrual hygiene and pain, being a dental background I came across lots of patients who were approximately at the age of 12-13 and were facing oral cancer disease… They were involved in drugs and tobacco. I started to study why and from where did these kids get involved in such things. I conducted a dental campaign where we found more than 50% of children take tobacco daily.

I took challenges and talked to my guide regarding this, we went to the district hospital of Chhattisgarh and we planned together with the team of the District hospital how we can stop them. We gave this proposal to Magistrate and Additional judge and the very next week that is this January they decided to take a challan of 70k from those students who are involved in such things. Also under the Cotpa act 2003, we conducted a program in which we trained police on how to stop and deal with those kids who consume such things

4. How are things at your home/ institute? How did people react to your inclusion in working for a cause that is in the taboo zone

My mother did not support me at first neither did my Institution. All they wanted me to study and pay less attention towards it but they feel it’s of no use. But when they found that yes, some people are changing by my saying they started to influence too

5. What are your future plans, and one piece of advice you would like to give to the youth members who are reading your story.

My future plan is to break the stigma that girls are nothing if a boy is not there in her life. She can stand alone work alone and rise alone. All she needs is love and support. And the only advice I would like to give is to be constant in whatever and whichever way you are working upon… Just be constant… You will rise.

We hope Shivangi succeed in her mission and make this world a better place for women.

From Bra Strap to the slightest corner of their cleavage: Women's clothing and its relation to slut shaming