Sakshi Malik eagerly wants to return to wrestling:- Sakshi Malik is not basking in the glory. She has expressed her desire to go back to home. It has already been 29 days since India’s first medal winner in the 2016 Olympics returned from Rio, and the wrestler has still now hardly got any time for herself since her arrival.

After she has fulfilled her duties in yet another promotional event here on Tuesday, Sakshi kept reminding everyone that she needs to catch a flight, fearing she would miss it due to the typical Mumbai rains. 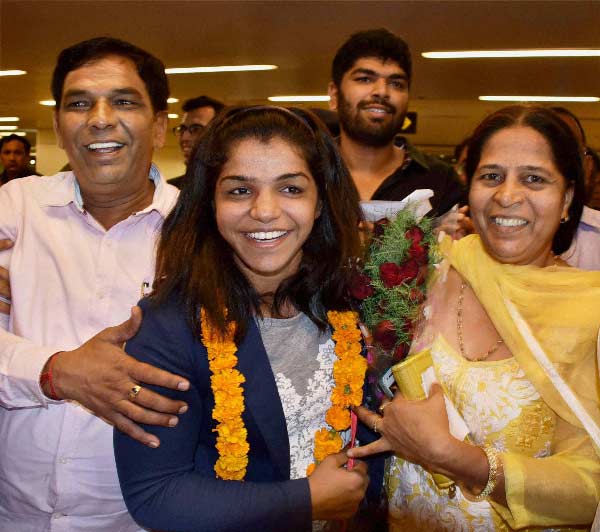 It was clear that Sakshi was eager to get back home and more importantly, itching to get back onto the wrestling mat.

When she was asked why? She replied She has been dying to get back to her wrestling mat, she seemed unhappy with the bit that her training has been stopped. Sakshi wants to get back to business.

She also said that, it is expected that she could start her training by next week, if not next week, for sure it would be starting from October 1.

An Olympic medal is the pinnacle for most of the sportspersons in the world over, something for which they put their blood and sweat in for many years together. But yet, many end their careers without even experiencing the high of winning a medal. Sakshi has got one in her first attempt. However, the word satisfaction remains alien to her.

Read Here : Sakshi Malik still loves to drive her Polo even after getting BMW!

Many Indian athletes who have boarded the flight to Rio could not quite live up to the expectations. In contrast, Sakshi was supposed to be merely soaked in the atmosphere of her first-ever Games, put up a good fight and she came back. She did fight, till the last second, and came back with a rather unexpected bronze.

Have a news story, an interesting write-up or simply a suggestion? Write to us at
info@oneworldnews.in
Tags
featuredhomeews Olympics Rio Sakshi Malik

Brangelina’s breakup, sums up 2016 as year of Breakups