Is The US To Blame For The Russia-Ukraine War?

The Ukraine-Russia conflict finally moved to what the world feared. Putin on Thursday declared war against Ukraine and the world just watched it happening helplessly. Though the west responded to Russia’s invasion with sanctions, China, India, and UAE abstained on the UN Security Council resolution on Ukraine’s invasion. The world is ineffectively trying to stop Russia, while Ukraine has entered into the most vulnerable position. On Friday, Russian forces entered the outskirts of Ukrainian Capital Kyiv and heavy gunfire was reported from the western part of the city.

Russia’s military also claimed that they have taken control of the southeastern city of Melitopol. As per the UN refugee agency’s representative in Ukraine, at least 160,000 people were displaced, whereas, the deputy interior minister of Poland said that about 100,000 people have entered the country since the invasion started. Ukraine’s health minister says 198 people, including three children, have been killed and further 1,115 people have been wounded so far.

The world has blamed Putin for the war and the massacre, but Putin had accused Biden of trying to push Russia into a war in Ukraine. Recently, Putin said “Their (US) most important task is to contain Russia’s development. Ukraine is just an instrument of achieving this goal.” He also said the US was ignoring Russia’s concerns about the expansion of NATO. Putin considers Russians and Ukrainians as “one people,” and accused Ukraine of being taken over by the west and extremists ever since its pro-Russian president, Viktor Yanukovych was relieved of duty in a 328-to-0 vote in 2014.

Will The US Get The Most Benefits From The Russia-Ukraine War?

Putin was concerned about the current security architecture and the military, political and economic relations between Ukraine and the west. He finds the current scenario a “strategic interest” of the US to put Russia into a dangerous and hostile situation. Russia believes that the US is using Ukraine as a pawn and want to look “great” again. However, Putin Isn’t the only one who believes that Biden will get the most benefits from the Russia Ukraine war.

Commenting on the ongoing Russia-Ukraine war, China put the blame on the US for the Ukraine invasion. Chinese analysts accused that the US will get the benefit from legitimizing its military presence in Europe by disrupting Russia-EU ties. Chinese analysts also said that the US is trying to increase uncertainty and concerns to harm the eurozone economy to promote capital flight from Europe to the US to ease the US inflation pressure.

Tulsi Gabbard recently tweeted that the war can easily be avoided if Biden and NATO had accepted Russia’s demand regarding Ukraine’s becoming a member of NATO. But is it that simple? Russian President Vladimir Putin demanded NATO that Ukraine would never ever join NATO, but that was not Putin’s only demand. Putin also demanded that NATO stop its eastward expansion and return Nato forces to every country that joined after 1997 including Bulgaria, Romania & 12 others.

Read More- Shocker! Amid the Ukraine Crisis, Europe is Gearing Up for Another refuge?

This war and suffering could have easily been avoided if Biden Admin/NATO had simply acknowledged Russia’s legitimate security concerns regarding Ukraine’s becoming a member of NATO, which would mean US/NATO forces right on Russia’s border

Why Does Ukraine Matter For Russia, Europe, And The US?

Ukraine shares long historical and cultural ties with Russia, and Putin has repeatedly said that Russians and Ukrainians are “one people — a single whole,” Russia also said it did not want to invade Ukraine or start a war, but the west is trying to put the country into war for their benefits. Putin has accused NATO and the US for providing Ukraine with weapons and military training that compromise Russian security. He blamed Nato’s eastward expansion for his decision to attack Ukraine. Russia sees Ukraine as more than a geopolitical issue, they consider it an integral part of a greater Russia.

The Russia-Ukraine conflict doesn’t end to their borders, it extends to the thousands of miles to the US and the rest of Europe. The conflict would increase the security threat to former Soviet countries in Eastern Europe. Russia’s invasion might raise tensions with other former Soviet republics and allies, the move also challenges Biden’s dominance over world affairs. With the end of the cold war, the US managed to establish its influence over the international orders, but Russia’s aggression has slowed down the influence.

The Russia-Ukraine war is likely to heighten the risk of inflation for Europe and the US’s economy. The war has already started showing its impact on the financial markets. The oil price jumped to $105 a barrel on Thursday.

“If oil prices stay at about $100 a barrel, energy costs for U.S. households could rise by $750 on average this year from last year, leaving them with less money to spend on other goods and services,” Reuters quoted Gregory Daco, chief economist for EY-Parthenon. 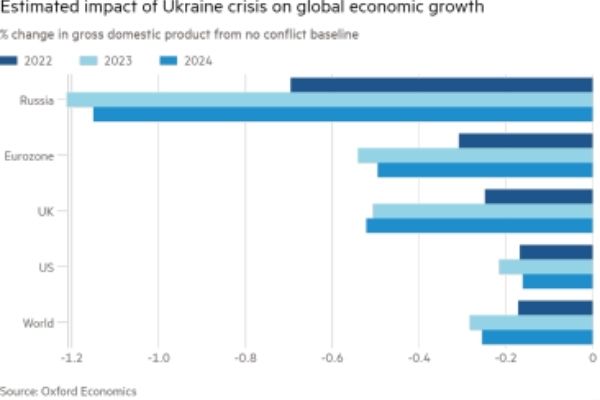 Read More- Russia-Ukraine Crisis: How It will impact India

Ukraine joining NATO is the major reason behind the ongoing Russia-Ukraine war. In 2008, Ukraine applied to begin a NATO Membership Action Plan. However, in 2013, pro-Russian then Ukrainian president Viktor Yanukovych suspended the agreement with the European Union reportedly under pressure from Russia. In 2014, Yanukovych was relieved of duty and fled the country and the interim government led by Arseniy Yatsenyuk agreed to make joining NATO a priority.

Currently, NATO is an alliance of 30 independent member countries and it is highly likely that Ukraine will get NATO membership. Russia considers NATO, the American-led alliance, a security threat for the country, and asked the US for a legal guarantee that Ukraine won’t get NATO membership. Putin is against Ukraine joining NATO because he believes that Ukraine might use military forces against Russia to reclaim the Crimean Peninsula, which Russia seized from Ukraine in 2014, or to reclaim parts in eastern Ukraine that are controlled by Russian-backed separatists.

“Imagine that Ukraine becomes a NATO member and launches those military operations.” Should we fight NATO then? Has anyone thought about it?” Putin said during a press conference at the Kremlin with Hungarian Prime Minister Viktor Orbán.

The road to joining NATO for Ukraine is still long. Russia has aggressively opposed Ukraine’s intention to join NATO and threaten severe consequences if NATO offers Ukraine membership. At a summit in Bucharest in 2008, NATO had said that Ukraine and Georgia will get the NATO members one day. But even after thirteen years of the Bucharest summit, Ukraine and Georgia are still waiting. Both the countries have both been attacked by Russia and over 14,000 people have died in the Ukraine-Russia conflict since 2014.

Recently, Ukrainian President Volodymyr Zelenskiy said that none of the NATO members did not respond to whether Ukraine will become a member.

‘I have asked 27 European leaders whether Ukraine will be in NATO …. Everyone is afraid, no one answers,’ Ukrainian President Volodymyr Zelenskiy said in a late night speech https://t.co/Tco566qKpI pic.twitter.com/LZFRh6WM7f

As the conflict gets stronger, the risk to the lives of 44 million Ukrainians increases. Moscow is very clear on its intention that they do not want NATO’s intervention in Ukraine. Putin said they are ready for the talk, but the west has its own interest. Though the west tried to stop Russia with sanctions, Russia threatened them back with severe consequences if they interfere. However, a possibility for the end of the war can be seen. Ukraine on Sunday confirms that it’s ready to hold peace talks and to negotiate with Moscow amid the crisis.

An Evening to Remember, Minu Bakshi mesmerized the audience with her Power Packed Performance!