Prince William and his wife Kate Middleton landed at Tezpur’s Salonibari airport, where they were received by CM Tarun Gogoi, and wife Dolly.

Soon they made a visit to Kaziranga National Park; the Prince was seen in a black suit while the princesses choose a sea green dress. This two day visit is basically to draw the attention to the conservation of one-horn rhino, found mostly in Assam.

Later the royal couple left for Diphlu resort, an Assamese mud house especially made for them with modern amenities. There they were entertained by traditional Assamese Bihu. 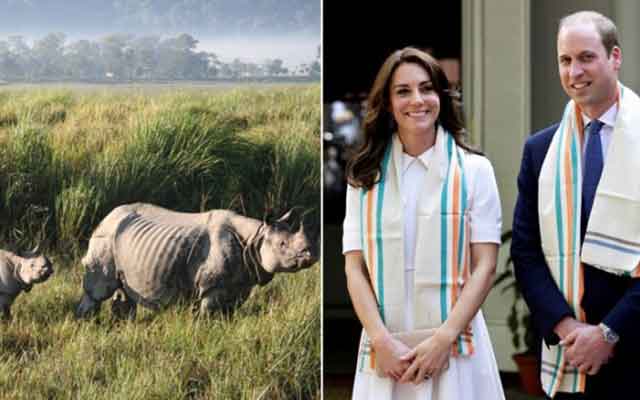 On Wednesday, the Prince and Princess will be visiting Bagori range, which is shut to public for a day, and see various animals.

They are to be taken out for a safari within the range and will meet the park staff. They are also scheduled to visit the Centre for Wildlife Rehabilitation and Conservation (CWRC), apart from a conservation for captive elephants.

They will also visit a village which was relocated after Kaziranga sanctuary came up.

Their food menu will include Bihu delicacies; the couple has also expressed a desire to stick to vegetarian food, especially because they are visiting a place of conservation.