Ozone Depletion Isn’t In News, But There Is A Bigger Environmental Threat To Defeat

Remember your school science textbook? We would all read about the ‘Ozone depletion’ and the ‘hole’ over Antarctica. But as we have since grown up, we wonder why we don’t hear about it anymore? Once considered a global crisis, Ozone depletion was a hot topic four decades back. In the late 70s, British meteorologist – Jonathan Shanklin observed the decline in the ozone levels. In 1985, British Antarctic Survey (BAS) scientists Joseph C. Farman, Brian G. Gardiner, and Jonathan D. Shanklin first published their findings on Ozone depletion, and the discovery of thinning of the ozone layer over Antarctica was termed as the ozone hole.

Their findings suggested that about 40 percent of ozone was reduced over Antarctica. However, recent studies have indicated that the earth is restoring ozone and might fully restore by 2060. But this didn’t happen all by itself, it took decades and exceptional actions to restore it. Here is how we managed to restore the ‘Ozone hole.’

What is Ozone depletion and how does it affect humans?

There are many vital elements and resources that make Earth form life, and the Ozone layer is one of them. It is found in the stratosphere between 15km and 30km above the Earth. The ozone layer works like Earth’s sunscreen which protects it from harmful UV radiation. It has the potential to block up to 98% of the harmful ultraviolet (UV) radiations coming from the sun that can affect life on earth.

Ozone depletion or ozone hole is the thinning of the ozone layer in the atmosphere, rather than an actual ‘hole’ in the sky. There are various elements that cause ozone depletion and the primary factor for ozone depletion is chlorofluorocarbons (CFCs). CFC is a molecule that contains carbon, chlorine, and fluorine, it is mainly used in refrigerants. Chlorine atoms destroy the Ozone molecules after they reach the ozone layer. One chlorine can destroy 100,000 molecules of ozone. Though ozone molecules can be reformed naturally with time, CFCs in the air makes it very difficult for ozone to reform once it’s destroyed.

Ozone presence in the atmosphere is important for survival. It absorbs the harmful UVA and UVB radiation and stops them from reaching Earth’s surface. UVA and UVB can lead to active diseases such as skin cancer, melanoma, premature aging, cataract, and a weak immune system. Not only this, the ozone layer saves us from sunburns. Without ozone, humans would get sunburns in 5 minutes

But Why Don’t We Talk About Ozone Depletion Anymore?

After the news of ozone depletion broke out, the world came together to prevent the environmental crisis. After the news reached the public, it put pressure on global leaders to take action. On September 16, 1987, Montreal Protocol, an international treaty, was adopted in Montreal that aimed to regulate the production and use of ozone-depleting substances (ODS). The agreement phased out 99% of ozone-depleting substances from various products. The treaty was signed by 197 countries, making it the most successful environmental agreement in human history. The protocol came into existence on January 1st, 1989. Since then, the ozone hole is shrinking and might return to pre-1980s levels by 2060. 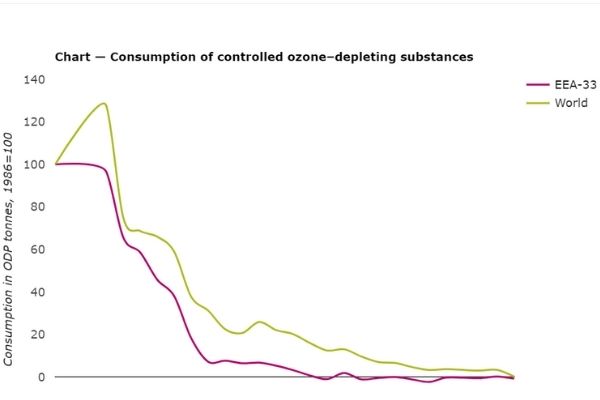 In 2018, research conducted by NASA found the first-ever direct proof of ozone recovery. As per the research, ozone depletion was reduced by 20 percent between 2005 and 2018. As per the UN, the ozone has been healing at a rate of 1% to 3% since 2000. If the current pace is sustained, the ozone layer above the northern hemisphere will be fully recovered by the 2030s.

Globally, around 2 million skin cancer cases are prevented each year. According to the US Environmental Protection Act (EPA), the US has saved millions of people from severe diseases and death since the Montreal Protocol came into force.

Read more- What is Polar Vortex & how it healed Hole in Ozone Layer?

The unpresidential climate action saved the Earth from one of the biggest environmental threats. However, the threat isn’t over. The ozone might be healing, but the current growing climate change is becoming the biggest threat to humanity. The global temperature is increasing and the efforts to limit the global temperature from surpassing 1.5 degrees celsius seem ineffective. The world needs to come together once again to fight another global environmental threat.

5 Incidents that Proves, this Pandav love Draupadi the Most