New song from Kedarnath ‘Sweetheart’ gets released, take a look

The makers of Kedarnath have finally released a romantic track from the film. After the fabulous trailer and devotional track Namo- Namo, the romantic track “Sweetheart” is here. Sushant Singh Rajput and  Sara Ali Khan are seen shaking legs with each other. The song is unfolding the adorable love story of Mansoor(Sushant Singh Rajput) and Mukku(Sara Ali Khan). The song has a wedding like set up. Sushant and Sara’s chemistry is just awww- dorable. 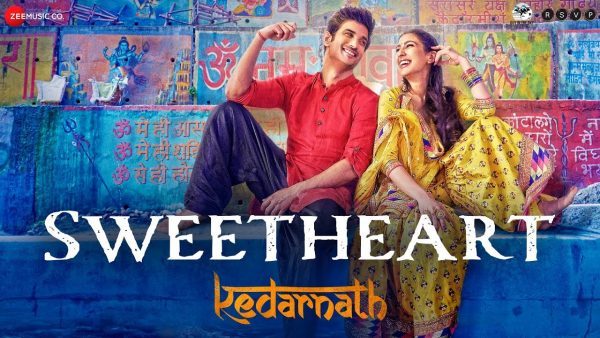 Obviously, Sushant and Sara are the main highlights of the song. Sweetheart is sung by Dev Negi. Music is given by Amit Trivedi and lyrics are written by Amitabh Bhattacharya. Well, the song is not that impressive, but you will like the sweet chemistry of the lead actors.

Well, Kedarnath is one of the awaited films of the year. After Janhvi Kapoor, people are eagerly waiting to watch Sara Ali Khan on the screen. The trailer had got a very good response and her presence was even praised by critics too.

Kedarnath is an eternal love story set in the backdrop of the Uttarakhand disaster. It is a combination of love and religion, passion and spirituality. Kedarnath will mark the debut of Saif Ali Khan and Amrita Singh’s daughter Sara Ali Khan. The film is directed by Abhishek Kapoor and is slated to release on December 7.

On the work front, Sara is also working with Ranveer Singh in Simba. The film is expected to release next year.

Have a news story, an interesting write-up or simply a suggestion? Write to us at
info@oneworldnews.in
Tags
featuredhomeews Sara Ali Khan Sushant Singh Rajput