How is the new COVID-19 variant is a threat and why and how much you should worry?

A new variant of the coronavirus that causes Covid-19 has been identified in South Africa, which officials there said is very worrying. The new strain, formerly called B.1.1.1.529, was named the Omicron variant by the World Health Organization.

It could fuel an outbreak and strain health systems in many countries, potentially under-developed vaccines and efforts to reopen economies and borders sparked a wave of risk aversion in global markets on Friday. Stock indices and crude oil declined while treasuries rose. Governments around the world have started banning travellers from South Africa and surrounding countries.

What’s different about this version? 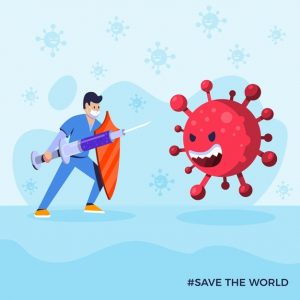 Scientists say that the Omicron variant consists of a large number of mutations in the spike protein, which plays an important role in the entry of the virus into cells in the body. This is what vaccines target. Researchers are still trying to determine whether it is more transmitted or more lethal than previous strains.

Where did it come from?

A scientist at the UCL Genetics Institute in London said it most likely developed during chronic infection of an immune-compromised person, possibly in an untreated HIV/AIDS patient. South Africa has 8.2 million people infected with HIV, the highest in the world. The beta version, a mutation identified last year in South Africa, may also have come from an HIV-infected person.

How widespread is this virus?

1) Initial PCR test results showed that 90% of the 1,100 new cases reported on Wednesday in the South African province, which includes Johannesburg, were caused by the new variant, said Tulio de Oliveira, a bioinformatics professor. According to, who run two gene-sequencing institutes in South Africa. In neighbouring Botswana, authorities on Monday reported four cases among people who were fully vaccinated.

2) In Hong Kong, a traveller version from South Africa was found, and in another case, a person was identified in a hotel room and was quarantined. Israel has recently identified a case in a man who travelled to Malawi. Belgium also said it had confirmed a case of the new COVID-19 variant in someone who had travelled from abroad.

How worrying is this version?

Caveat first: data here is *very* preliminary, so everything could change. Nonetheless, better safe than sorry.

1) Based on the data we have, this variant is out-competing others *far* faster than Beta and even Delta did ?? pic.twitter.com/R2Ac4e4N6s

1) It is too early to say that. The WHO said the variant “has been found at faster rates than previous surges in infection, suggesting that this variant may have a development advantage.” But it also noted that fewer than 100 complete genomic sequences of the new strain are available, which could add to the time it takes to study how it compares to previous strains and its impact on COVID-19 treatments and vaccines.

2) Viruses mutate all the time, with changes sometimes weakening the virus or sometimes making it more efficient at evading antibodies and infecting humans. COVID-19 vaccines have shown they are effective against previous variants and the pills being developed by Merck & Co. and Pfizer Inc. may also provide new treatments.

How are other countries reacting?

1) The UK issued a temporary ban on flights from six African countries, and others followed suit. Singapore is restricting entry to people who have been to South Africa and surrounding countries within the past 14 days, while the European Union has blocked air travel from southern Africa to proposed member states.

2) Australia said it would not rule out tightening border rules for travellers from southern Africa if the situation escalates, while India has stepped up screening of travellers arriving from South Africa, Botswana, and Hong Kong. South African Health Minister Joe Fahla said the new travel restrictions imposed on the country, especially by the European Union, were “unjustified”.

What is black fungus? It is infecting Covid-19 patients

What should we see next?

In the US, which recently lifted a one-year ban on tourism from much of the world, top medical adviser Anthony Fauci said he would like to see more data. The European Centres for Disease Prevention and Control assigned the variant – first detected in South Africa and Botswana – to the “Variants of Concern” category. BioNTech expects data from lab tests within two weeks to see how it interacts with its vaccine.