When MS Dhoni announced his retirement from all forms of International Cricket on 15th August, we all were shocked, but MS Dhoni is like this. He decides big things unannounced. But we didn’t become that sad, because we knew that ‘Mahi Phir Marega’ in IPL 2020. However, there were concerns because MS Dhoni had not played competitive cricket in more than 14 months. We knew that lack of playing games might take a toll on his performance when the IPL kicks in.

An image of Dhoni became viral in which he was sporting a loose T-Shirt and had a white beard. Lots of voices on social media called him old and not fit for playing. But when airport images of Mahi, while he was travelling to UAE went viral, critics were shocked with his transformation. The white-bearded Dhoni had now black-fully trimmed and styled beard, tight clothes-enough to show his strong biceps muscles.

Read more: IPL to kick-start today, 5 reasons why IPL 2020 would be special 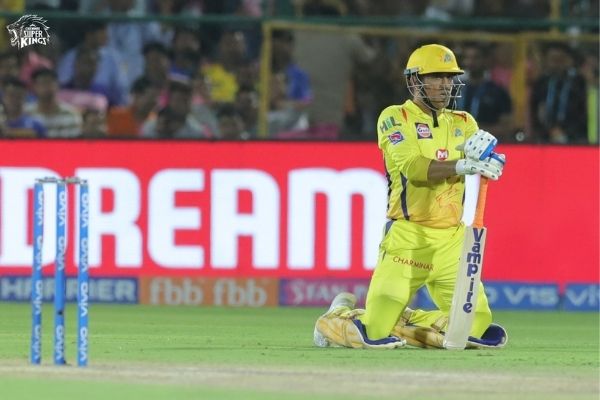 Three tests for Dhoni ahead IPL 2020

This transformation was very well explained by Instagram posts (showing before and After images) on MS Dhoni fan accounts. Yet, this transformation was not enough. Dhoni had three tests pending for him before the inaugural IPL match. The first one was to cope with the absence of Suresh Raina and Harbhajan Singh, the second was to find his mojo in leading the side, lastly to hit sixes.

In the inaugural match, we saw MS Dhoni passing two tests. He found the right combination in the absence of Harbhajan and Raina and led the team to victory against the mighty Mumbai Indians on their own turf. His captaincy blossomed when he stuck to being MS Dhoni and made experiments. He sent the young Sam Curran ahead of himself to use the long handle. The talented Curran proved the experiment right as he struck a quick 18 runs off 6 balls and changed the momentum of the game.

After conquering Mumbai Indians, Dhoni was up against Steve Smith-led Rajasthan Royals. The match was to be played at the batting paradise, Sharjah. The team was ready but was Dhoni ready? We had seen his unorthodox but effective captaincy in the first match. The dismissal of Rohit Sharma was a prime example. The powerplay was on, Dhoni brought Piyush Chawla to bowl. The long-off was brought in and Dhoni tempted Sharma to go over mid-off and in process, Rohit fell prey to experienced Chawla.

The dead souls are walking now

Rajasthan put up a massive score of 216 in the first innings with contributions from Sanju Samson, Steve Smith and Jofra Archer’s last over havoc. The expert panel during the innings break said, if there is any team capable of chasing the record 217, it was MS Dhoni’s Chennai Super Kings. A good start from Watson gave hopes but wickets kept trembling. After seeing Dhoni for just 2 balls in the first match, fans were excited to watch him hit some sixes.

As the wickets kept chipping, our wait to see Dhoni kept increasing. But finally, he entered the pitch in 14th over. The match was almost a lost cause by then as the required rate was more than 15. While we expected bombarding from the first ball, as the situation demanded, Dhoni kept dealing in singles and doubles. He was just 10 of 13 balls in the last over, being bowled by Tum Curran. His fans were upset with his batting so far. Then came MS Dhoni special, a hat-trick of sixes. Three gigantic sixes woke up the dead souls which wanted to say ‘Mahi Maar Raha Hai’ from a long time. These souls were now animated, elated and proudly chanting ‘Dhoni-Dhoni’ at their homes. One of those sixes landed on the streets of Sharjah nearby passing cars.

He might have been little late to arrive on the crease, he might not have taken his team to a win, but he definitely assured that Dhoni has still got it. A flash appeared in the sky that Mahi has arrived and Dhoni in the last over was a sight to behold.

What is Pink Tax? Why is it problematic?