On Mother Teresa birth Anniversary, let us know her journey of becoming a saint

It is Mother Teresa birth anniversary; she was born in the year 1910 and came to India in the year 1929. After then, she dedicated her entire life to poor people. For that, she was even awarded the Noble prize in 1979.
Mother Teresa became an official “saint” a few years ago. The prospect of her canonization would mean very little to those outside the church, many of whom deride her. Indeed, she was the subject of the famous diatribe by Christopher Hitchens, who described her as “a fanatic, a fundamentalist, and a fraud.”
In our view, she deserves sainthood for several reasons. Even those not wholly committed to the angelic orders further revere her example of commitment to helping the poorest of the poor.
How to become a saint as per Roman Catholic terms? 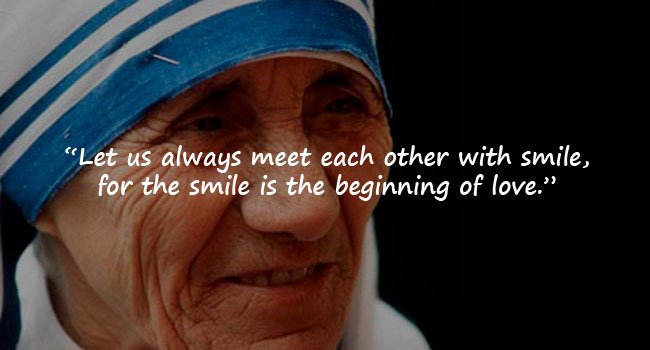 In our view, she deserves the sainthood for a number of reasons, and even those not wholly committed to the angelic orders further revere her example of commitment, to help the poorest of the poor.

In Roman Catholic terms, let us understand what it means to become a saint. There are over 10,000 saints in the church, and these figures acquire sainthood through a process that has been used since the 10th century.
Before that also, the people became saints by widespread acclaim — a process that was not rigorous. There is a step-by-step, which starts with the death of somebody who was further regarded by many as “holy.” The local bishop investigates the person’s life for signs of THIS holiness. After this, a panel in the Vatican further examines the potential saint, and — if successful — the person becomes “venerable.”
This is followed by “beatification,” which involves at least one miracle. A miracle suggests that the person lives in heaven and can intercede with God on someone’s behalf. In 2002, the Vatican ruled that an Indian woman’s stomach tumour had been miraculously cured after prayers to Mother Teresa, despite her husband’s doubts.
The idea is not that the church makes someone “blessed,” hence beatified; the idea is basically that God has already done this, and the church is now acknowledging it. At least another miracle is required for the actual sainthood.
There is a well elaborate process involved in making saints, and the church listens to those who have opposing views, such as Hitchens on Mother Teresa. The late writer did not like her because she took money and awards from some creeps — including the horrible Duvalier family of Haiti.

She died in 1997 – at 87 – and was beatified in 2003, the first step to sainthood.
Edited by Ayushi Mittal
Have a news story, an interesting write-up, or simply a suggestion? Write to us at info@oneworldnews.com
Tags
Birth anniversary featuredhomeews Inspiring quotes Mother Teresa Religion women success story