The Hindu epics are full of uniquely wonderful historical events where the feminine power has always been a centric attraction. From the Rig Vedic time to Mahabharat, the feminine power was highly glorified and women were portrayed in various forms, including warriors, philosophers, devoted wives, self-reliant individuals, and goddesses. In the Hindu epics, the role of a woman was not only limited to a loyal and devoted wife but a warrior, battlefield companion, ruler, and teacher. There are hundreds of stories in the Hindu textbook that show the bravery, intelligence, and jurisdiction authority of the women.

Mahabharat takes us to the time when women were the great warriors and possessed skills in archery, horse riding, martial arts, sword art, and hunting. Here, we have picked our four favorite and the most powerful female characters of Mahabharata that show feminine power and stand as feminist icons. 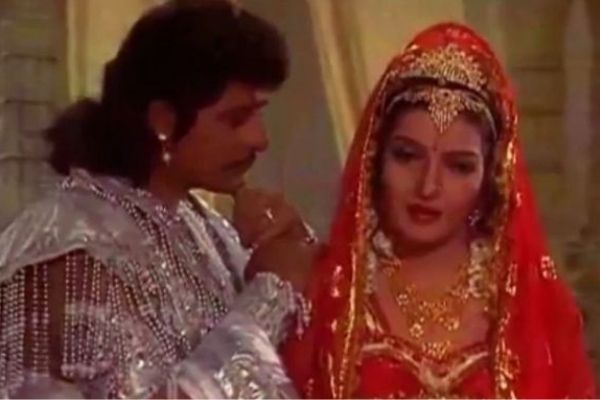 The story of Chitrangada is mentioned in the “Arjuna-Vanavasa Parva” of the Mahabharata. Chitrangada was the daughter and the only child of king Chitravahan, who was a trained warrior princess of the Manipur Kingdom. Chitravahan was the ruler of Manipur, and since Chitravahana did not have any heir, except Chitrangada, he trained her in warfare. Chitrangada was well-versed in martial arts, archery, horse riding, and administration.

When Arjun was in a 12-year exile, serving a penalty for walking into the room when Draupadi and Yudhishthir were staying, he met Chitrangada in Manipur. Impressed by Chitrangada’s archery skills and elegant beauty, Arjuna sought king Chitravahana’s permission for Chitrāngadā’s hand in marriage. Arjun and Chitrangada married each other and Arjun stayed with her for three years. After Chitrangada gave birth to a son ‘Babruvahan’, Arjun went away on his wanderings, promising her that he would take her back to his kingdom. Chitrangada trained her son for warfare, archery, and other skills like her and Arjun.

As per the Ashvamedha Parva of Mahabharata, Arjun reached Manipur following his horse, which was sent to perform Ashvamedha yagna. On his arrival in Manipur, he encountered Babhruvahan and was challenged for a fight. In the fight between Arjun and Babhruvahan, Arjun was hit by an arrow launched by Babhruvahan and fell unconscious. Chitrangada was informed about the fight and she came to see Arjun. Arjun was relieved by Ulupi (Arjun’s other wife) with mythical herbs. Arjun, along with Ulupi, Chitrangada and Babhruvahan returned to Hastinapur. 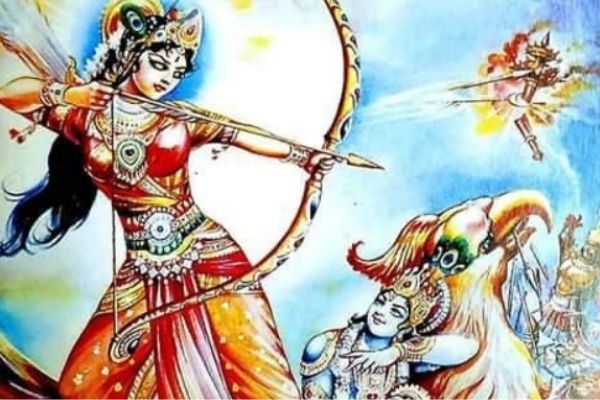 Satyabhama’s portrayal is described as a bold feminine character in the Hindu epics, who was a fearless warrior. Satyabhama was the third wife of Krishna and she is described as the incarnation of the goddess Earth (Bhudevi). The story of Satyabhama is mentioned in multiple chapters of Mahabharat, including Ashvamedha Parva and Vana Parva.

Satyabhama was an ace archer and a warfare expert. She accompanied Krishna to the battlefield and participated in a fight with Narakasur. Lord Brahma had blessed Narakasur that he could be killed only by her mother, and Satyabhama is believed to be the mother of Narakasur. Narakasur had defeated Indra, abducted 16,000 women, and stolen precious jewels of Aditi – the mother of devas. After Satyabhama was informed about the austerity of Narakasur, she decided to go into the war with him.

Satyabhama, with her weapons, went for the war with Narakasur along with Krishna. Krishna and Narakasur engaged in fierce war and Narkasur attacked Krishna with a powerful weapon. Krishna fell unconscious, which made Satyabhama more furious. Satyabhama shot an arrow at Narakasur and killed him.

The cause of Bhishma’s death, Amba was one of the most fascinating female characters of the Mahabharata. Amba was the eldest daughter of Kashi’s king – Kashya, whose sole life purpose was the destruction of Bhishma. 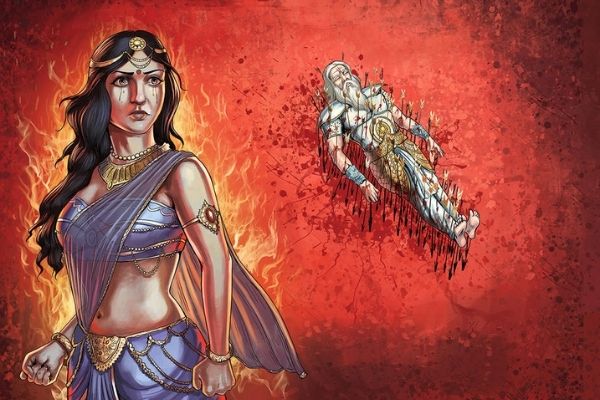 In the Adi Parva of Mahabharat, the story of Amba’s swayamvara is mentioned. In her Swayamvar, Bhishma abducted Amba for the marriage of his brother Vichitravirya. After reaching Hastinapur, Amba told Bhishma that she was in love with Salva and would marry him. After listening to her confession, Bhishma decided to let her go to Salva, but Salva refused to marry her. She returned to Hastinapur and blamed Bhishma for her fate. Bhisma then asked Vichitravirya to marry Amba, but Vichitravirya also refused to marry her.

The heartbroken Amba then reached to Bhishma and asked him to marry her, but Bhishma too denied her proposal citing his vows of celibacy. Amba felt devastated and sought Bhishma’s death. She reached out to several kings to defeat Bhishma, but they all refused to fight Bhishma knowing his strength. On the advice of sage Hotravahana, she reached Parashuram and convinced him to fight Bhishma. In the 23-days of battle, the result was not delivered and the battle was declared a draw. After no conclusion of the battle, Amba decided to avenge Bhishma on her own.

Abma went into extreme austerities for years and gave up on food, water and sleep. Impressed with her penance, Shiva blessed Amba and said that she would be born as a man in her next birth and defeat Bhishma. Years later, Amba was reincarnated as Shikhandini, the daughter of Panchala King Drupad. After marrying Dasarna, Shikhandini exchanged gender with Yaksha and became ‘Shikhandi,’ and accompanied Arjun on his chariot during the Kurukshetra war.

Bhishma knew that Shikhandi was the incarnation of Amba, and lowered his weapons because of his vow to not use weapons against women. Taking the advantage of Bhishma’s vow, Arjun pierced Bhishma with arrows and Amba became the reason for Bhishma’s destruction. 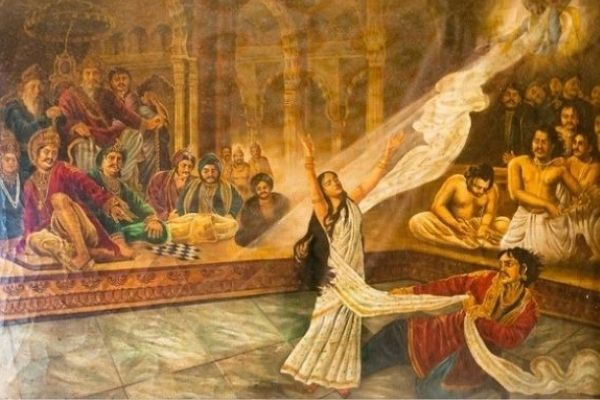 Draupadi, undoubtedly, was the most important and centric part of Mahabharat. The story of Draupadi is widely narrated in various folklores, poems, literature, and arts and performances. In several traditions, Draupadi is worshipped as a Goddess and there are several temples dedicated to Draupadi across India and other countries, including Sri Lanka, Mauritius, and South Africa.

Popularly known for being a common wife of Pandavas, Draupadi has a more versatile role in Mahabharat. She was a combination of beauty, bravery, and intelligence with a strong will and was raised as a feminist icon. Draupadi is considered the reason behind the great war of Mahabharat. She was molested in the courtyard by Duryodhan and Dushasan after Yudhishthir lost her in the game of dice. Draupadi questioned Yudhishthir’s rights to place her at stake and cursed the Kuru dynasty that there will be no male heir to continue their dynasty. After Dushasan tried to remove Draupadi’s saree, Bhima vowed to drink blood from Dushasana’s chest.

On the 16th day of the Kurukshetra war, Bhima killed Dushasan and fulfilled his vow. In a popular myth, Draupadi washed her hair with the blood of Dushasan to avenge her humiliation, however, the instance is not mentioned in the Vyasa’s Mahabharata.

Draupadi was the sole standing force who sought justice and righteousness. She raised her voice, and unlike the Pandavas, she rejected to accept Duryodhan’s slavery. Draupadi was not described as a common woman, but an incarnation of the goddess. The Adi Parva of Mahabharat describes Draupadi as goddess Sri. In other traditions, Draupadi is portrayed in various forms of the goddess. In the annual fest of Bangalore Karaga, Draupadi is worshipped as the incarnation of Adi Shakti.