After the onset of the pandemic, cinema halls are shut.  Therefore, cinephiles shifted themselves to video streaming portals also known as over-the-top (OTT) platforms. It is now the new way of watching small and engaging series. The OTT world has not only given us some incredible series but also some incredible actors. Most of the faces are well known and had shown their true mettle already in the Bollywood industry while some came out as a big surprise for us.

Here is a list of the TOP 14 most loved male celebs of Hindi OTT series.

From dialogue delivery to presenting relatable characters on-screen, Pankaj Tripathi has really aced all the genres that can rule the heart of the masses.  Now, Tripathi will be featured in the upcoming light-hearted comedy-drama film, Mimi. He will be paired opposite Kirti Sanon.

‘The Family Man’ actor Manoj Bajpayee has been actively working in the industry for almost 2 decades now. From playing shady roles in films like Gangs of Wasseypur to winning hearts as Srikant in the Family man series, Bajpayee has never let his audience down.

Now, Manoj Bajpayee will be seen once again playing the role of a leading cop in ‘Dial 100’.

The last 10 years of the Bollywood industry has seen the emergence of Nawazuddin Siddiqui as a star who can pull off any role nonchalantly. He is one of the phenomenal actors the industry has.  The actor who is now starring as a lead had a very humble beginning.  Adding another masterpiece to his catalogue, Nawazuddin will be featuring as an antagonist in Tollywood movie actor Chiranjeevi’s film.

Kunal Khemu was introduced as a child actor in ‘Sir ‘but is better known from ‘Hum hain rahi pyar ke’. After that, his work was only noticed a bit in multi-starrer films Dhol, Golmaal 3, Golmaal again or Kalank.

With the emergence of OTT platforms, Khemu has impressed the audience with his acting skills in films like Loot case and web series Abhay 2.

After ruling the silver screen, the big boss famed actor Sidharth Shukla tried his luck on the big screen and managed to bang in films like Humpty Sharma ki Dulhania and business in Kazakhstan. But what makes Shukla feature in this list is his commendable performance in Alt Balaji’s popular series Broken But Beautiful 3.

Read More: 7 Celebrity Couples Who got Stuck In Controversies

After playing some iconic roles in Bollywood, Arshad Warsi is back with a crime thriller web series ASUR.

Vikrant Massey comes as a breath of fresh air with his newly released 14 phere.

Sidharth Malhotra recently made his OTT debut and his fans and critics are applauding his commendable performance as Vikram Batra. His chemistry with Kiara Advani was loved by all. After the release of Shershah, he has become one of the most loved male OTT celebrities.

Barun Sobti is not a new face for the television industry. He has already received a huge appreciation for his role in Asur. He is now busy shooting for Asur 2. 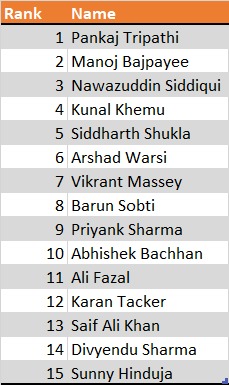 There are some other honourable mentions who were not noticed earlier but are ruling OTT platforms now.

Trollers Attacked Shilpa Shetty after Raj Kundra arrest: How Fair is this?