Women and Power: Indian Protests and Movements led by Women in Contemporary

Wonder if this list really needs any explanation, or if there can be any words that can rightly write about the power of these protests and movements led by women. So, directly getting on the point, here is the list of most impactful Indian Protests and Movements led by Women in contemporary.

15 July 2004, 12 women in Manipur stripped naked at Kangla Fort in the Imphal valley with a banner, “INDIAN ARMY RAPED US”. This protest was against the 117th Assam Rifles, who was accused of raping and murdering 32-year-old Thangjam Manorama. Thangjam’s body was found with 16 bullets with her genitals destroyed. The ‘Mothers of Manipur’ protested naked saying, ‘we all are Manorama’s mothers……Kill us. Rape us. Flesh us.’ Post that, Women in Manipur have also led movements and battles against human rights violation, corruption, drug menace, Armed Forces (Special Powers) Act (AFSPA), and in the bygone year, the CAA-NRC protests in the Northeast.

On January 1, 2019, a major event occurred at Sabrimala Temple, where two women entered the Temple of Sabrimala which is dedicated to the Hindu deity, Lord Ayyappa. Traditionally, women in their menstruating age are strictly barred from entering the temple, and the two women who entered were of the menstruating age. In Kerela, Lord Ayyappa is considered as celibate and menstruation, and menstruating women were then considered a disgrace to the deity. Post this incident of women entering the temple, there were massive protests by women demanding their right to go inside the temple.

Read more: Wrongful Convictions – Destroying the lives of innocents. Is the Indian Judiciary to blame? 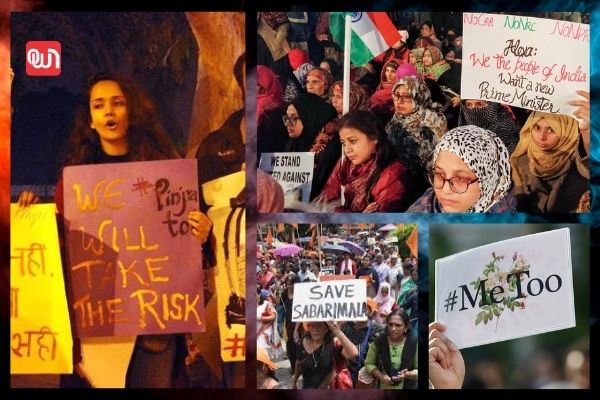 One of the primary movements against crime against women, essentially, crimes against women in the workplace came to people’s notice with the Metoo Movement. The movement is certainly a global movement, started by Alyssa Milano, an American actress who asked women to tweet about experiences of sexual harassment with #metoo. The Indian wave of #Metoo started with comedian Utsav Chakraborty, who was called out for sending nudes sending to women. The credit to kickstart the Indian Metoo movement certainly goes to Tanushree Dutta who complained against Nana Patekar. Post that, thousands of women came out and tweeted about their cases of sexual harassment, and is going still going. It is potentially the most impactful online movement in India and in the world.

An agitation, that the protestors like to call as still ongoing, is an agitation against the Citizenship Amendment Act and National Register of Citizens. Originated from the streets of Shaheen Bagh and Jamia Nagar, in the protests, there sat more than 1 lakh women for 101 days before the pandemic hit the country, and the nationwide lockdown was announced. The protest is known to be one of the longest and most peaceful protests of all time.

Run by female college students, Pinjra Tod (Break the cage) movement started in August 2015, when the students of Jamia Millia Islamia submitted an open letter to the VC calling out the gender-biased rules for the women’s hostel. Since then, the movement only became bigger and better. Their major aim is to challenge the rules and narratives around gender and question the brahminical and patriarchal rules that fail to give space to women and other minorities.

Where these are the contemporary protests, there have been so many historic movements and protests where women took lead or contributed to the revolution. Chipko Movement, Channar Revolt, The Bodh Gaya Movement, the role of women in Quit India Movement, etc. Let us know about more such movements in the comments.