5 Indian web series that explored the lesbian relationship and you must watch it!

Love is a beautiful feeling and one can fall for anyone anytime. It has no boundaries. But when it comes same-sex love, things become complicated.   In India being a lesbian is a cruse for any girl. India has come a long way, but still, there are so many issues in which our society needs a redo.  One such issue is a lesbian relationship. So to break stereotypes and serve something out of the box, here are 5 web series on the lesbian relationship that will blow your mind. 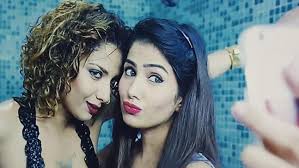 1. The Other Love Story is the first Indian Web Series on Lesbian love. This series tells the same sex love between two neighbors who live in Bengaluru, Aachal, and  Aadya. The lead pair Shweta Gupta and Spoorthi Gumaste have played the role of a lesbian couple

2. Twisted: Twisted is a romantic, Crime-Suspense thriller web-series made by filmmaker Vikram Bhatt starring Nia Sharma and Namit Khanna in the lead roles. There was a queer twist in the story where Alia (Nia Sharma) and her live-in-relationship girlfriend Dr Zara Khan (Isha Sharma) indulge in some intimate kissing and lovemaking. It seems LGBTQ-themed content is trending among Bollywood filmmakers these days.

Also Read: 10 Best Web Series Which You Need To Watch At Least Once

3.Dev DD: Dev DD is kind of the female version of the classic Devdas, it tells us the story of Devika who get addicted to sex and alcohol. Devika’s best friend Chandni is a Lesbian and lives with her partner. They had shown some intimate and kissing scenes in this web series.

4.Maaya 2: Vikram Bhatt’s web series ‘Maaya’ spoke on a topic that many would be uncomfortable to deal with. Now, the second season of the same has been released that talks about another taboo topic of that of lesbian love or same-sex love. ‘Kumkum Bhagya’ famed Leena Jumani who will feature in a bold avatar in ‘Maaya 2’ says they are trying to portray that it’s a love story that can happen between any gender.

5. Love Life & Screw ups: This series is based on both lesbian and gay characters. this series explores relationship struggles of Couples.  In this web series, Zeenat Aman has played a pivotal role.

Nipah Virus causes and signs: How you can protect yourself?

Want Flawless Skin? Eat strawberries as much as you can!