Heart-Wrenching plane crashes which left us in tears!

2020 is officially a bad year. Every then and now, we are hearing bad news.  India received heartbreaking news on Friday evening as the Air India plane crash at Kozhikode in Kerala with 191 passengers on board. This is the first major plane accident since the 2010 crash at Mangaluru airport. Reports say that the Air India Express-operated Boeing 737-800 aircraft overshot the airport runway of Kozhikode and fell 35 feet down a slope. That resulted in the aircraft splitting into two parts.

Why tabletop runways are challenging?

As per the government officials, the Air India Express Boeing 737-800 aircraft at Kozhikode did not catch fire after crashing, which minimized the number of casualties.  A Directorate General of Civil Aviation (DGCA) official said that the aircraft seemed to have touched down the runway at higher than usual speed, which gave less time to pilots to bring the aircraft at a halt on the runway which is shorter than usual.

It is also said that poor weather at Kozhikode airport at the time when the Boeing 737-800 aircraft plane was trying to land worsened the situation. A runway that is subjected to a downpour causes a water layer on the surface that reduces the friction and causes aircraft to skid when the pilot applies the brakes. Without brakes working in full capacity, stopping the plane on time becomes even more difficult.

Read more: Sports events that are taking place amid the pandemic 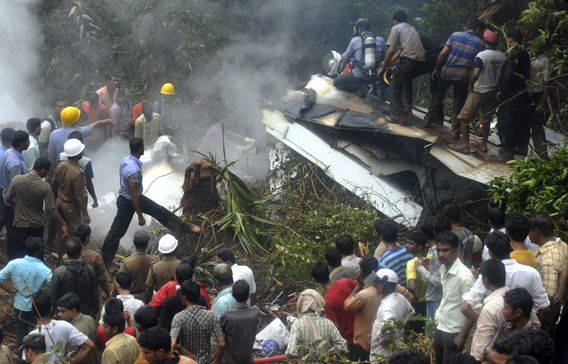 A similar incident happened in Mangaluru in 2010

Kozhikode’s runway is situated at 2,680 meters and is only about 400 meters longer than Mangaluru’s airport where a similar incident had taken place. An Air India Express aircraft overshot the runway at Mangaluru airport, Karnataka in 2010 and crashed into a valley before bursting into flames. The incidents claimed the lives of 158 people. Another Air India Express plane from Dubai to Mangaluru diverged off the runway at Mangaluru in 2019 and halted in soft ground frightening 181 passengers on board.

Apart from the Mangaluru and Kozhikode airport, Pakyong airport in Sikkim, the Lengpui airport in Mizoram, and Kullu and Shimla in Himachal Pradesh are built on tabletops. Other tabletop airports in foreign countries include Kathmandu in Nepal and Paro in Bhutan.

Soon after the Mangaluru incident in 2010 which claimed 158 lives, the Directorate General of Civil Aviation (DGCA) had banned wide-bodied planes from landing at Kozhikode airport in Kerala. Wide-bodied aircraft require longer distances to slow down because of their higher payloads.

The crash could put other airports under the scanner which see regular narrow-bodied aircraft operations with shorter runways in comparison to other airports like Patna, which is just 2,072 meters in length. New Delhi’s Runway 29/11 is the longest in the country with 4,430 meters of distance.

June 2020: Operations were suspended at the Chhatrapati Shivaji Maharaj International Airport (CSMIA), Mumbai for nearly 4 hours after a FedEx flight 5033 veered off the runway while arriving from Bengaluru, amid heavy rains triggered by Cyclone Nisarga.

Nov 2019: A GoAir plane from Nagpur had veered off the runway at the Kempegowda International Airport, Bengaluru due to poor weather conditions. Directorate General of Civil Aviation suspended pilots for landing the aircraft even when they lost the “visual reference” 50 feet before the touchdown.

July 2019: A SpiceJet domestic flight to Surat from Bhopal overshot a runway at the airport in Surat due to heavy rainfall and wind. None of the 43 passengers and 4 crew members died in the incident.

May 2019: A major mishap was averted last year at the Chhatrapati Shivaji Maharaj International Airport in Mumbai when an Indian Air Force plane overshot the runway. It resulted in the shutdown of the runway for 16 hours.

April 2019: A SpiceJet plane skidded off the runway while landing at the regional Shirdi airport. The plane touched down the runway 30-40 meters away from the designated landing spot and veered off the runway.