Who is Khurram Parvez and why his arrest matter?

The National Investigation Agency (NIA) on Monday arrested Khurram Parvez. He is known as a defender of human rights.  The NIA is following a one-day raid at his residence as well as the office of the Jammu and Kashmir Coalition of Civil Society (JKCCS), the NGO of which he was the program coordinator.

According to the arrest memorandum submitted to Parvez’s family, the NIA has framed charges under sections 120B (party to a criminal conspiracy) and sections 121 (waging war against the state) and 17 (financing) of the Indian Penal Code. . Terrorist Act), Section 18 (conspiracy), Section 18B (recruitment for commission of a terroristi act), Section 30 (membership of a terrorist organization) and Section 40 (offence of raising funds for a terrorist organization) Unlawful activities (prevention ) Act (UAPA).

Role of JKCCS in documenting the unrest in the Valley.The JKCCS has been instrumental in cataloging alleged incidents of human rights violations in Kashmir, including killings, forced disappearances, torture and arrests, over the three decades of conflict. The group also maintains a database to track the violence taking place in the area. It publishes annual and six-monthly reports on the demolition of residential structures committed by security forces during killings, assaults and injuries and even gun battles.

Parvez was earlier arrested in 2016 when Kashmir was reeling under civil unrest following the killing of militant commander Burhan Wani. On 14 September 2016, Parvez was stopped by immigration officials at Indira Gandhi International Airport from flying to Geneva, where he was scheduled to attend a UNHRC session. He was imprisoned for four days in a sub-jail in Kupwara under sections 107 (security for the maintenance of peace) and 151 (planning to commit any cognizable offence) of CrPC, and upon his release, he was arrested again by the authorities. , this time a stricter preventive detention law under the Public Safety Act.

I’m hearing disturbing reports that Khurram Parvez was arrested today in Kashmir & is at risk of being charged by authorities in #India with terrorism-related crimes. He’s not a terrorist, he’s a Human Rights Defender @mujmash @RaftoFoundation @GargiRawat @NihaMasih pic.twitter.com/9dmZOrSwMY

Notably, he was later shifted to Kot Bhalwal Jail in Jammu. After serving a jail term of 76 days, the Jammu and Kashmir High Court revoked his detention under the PSA. Khurram Parvez was slapped with the Public Safety Act (PSA) in 2016. His arrest came a day after he was barred from traveling to Switzerland to attend a session of the United Nations Human Rights Council. He lost his leg in a landmine while monitoring the 2004 parliamentary elections.

How his arrest stirs political tension in Kashmir again?

The arrests also come at a time when tensions are rising in the Kashmir Valley following the recent deaths of two civilians. Police said suspected terrorists were allegedly killed in gunfire when security forces attacked in Srinagar.

But the civilians’ families denied the police version of the incidents, saying they were deliberately killed by Indian soldiers while being used as human shields. The deaths sparked days of protests in the region, which has seen an insurgency against Indian rule since 1989. Both India and Pakistan claim the territory in its entirety but control only some parts of the region. Neighbors armed with nuclear weapons have fought over it twice. Over the years, India has been accusing Pakistan of pushing thousands of terrorists across the border to create instability in Indian-administered Kashmir. Islamabad has denied the allegation. 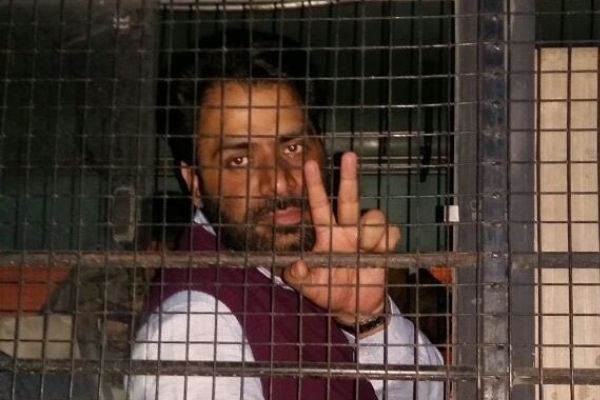 The Unlawful Activities Prevention Amendment (UAPA) Bill is an anti-terrorism law that seeks to designate a person as a “terrorist”. On 24 July, the Lok Sabha approved changes to the existing law. On 2 August the Rajya Sabha passed the bill, paving the way for it to become a law.

Ex-coal secretary : Jail me, I can’t afford to hire lawyers

What is the status of UAPA?

According to the crime records bureau, 6,900 UAPA cases were reported between 2014 and 2020. This means an average of 985 cases were reported each year. Between 2014 and 2020, 10,552 people were arrested and 253 were convicted under the UAPA. This means, on average, 1,507 people were nabbed each year and an average of 36 people were convicted.  Punjab is among the top eight states and union territories in registering cases under the Unlawful Activities (Prevention) Act and among the top five states in registering cases under the Official Secrets Act, according to the latest National Crime Records Bureau (NCRB) for the year 2020. ) reported.

One Year of Farmer Protests, Timeline Dedicated To A Year Of Suffering