Jasmin & Aly Marriage Predictions : When we talk about most adored couples in the entertainment industry, we cannot miss Jasmin Bhasin and Aly Goni. Well, the couple started off as best friends and shared warm equation with each other. When both of them entered the Bigg Boss 14 house, they realized their love for each other. Jasmin and Aly have been dating each other for the past three years. Both of them are madly in love and extremely fond of each other.

Recently, we did many Kundli Milans on our website. From Shamita – Raqesh to Karan and Tejasswi, today we bring to you Jasmin & Aly Marriage Predictions by our celebrity astrologer Poonam Gaur.

Let us take a look at Jasmin & Aly Marriage Predictions

Poonam Gaur revealed that they will enjoy a great compatibility with each other. Both of them respect each other. Jasmin is quite expressive and an emotionally balanced person. She will love her family and will remain firmly committed to her responsibilities. According to their Kundlis, they are 81 percent compatible which means a successful love marriage. Their relationship will be full of love, respect and understanding. Aly is Jasmin’s friend, partner and the biggest supporter.

Read More- 4 Real Life TV couples we adore & love with all our hearts!

Aly and Jasmin both know their worth and they love themselves too which increases their capacity to love each other fully. Aly Goni knows what a woman really needs. He is supportive and learns from his past experiences. Jasmin is a strong headed woman and doesn’t keep anything in heart. At times, she can be stubborn. In that case, Aly Goni will balance the situation with his wit and patience. Aly is quite expressive that will also help him form a deep connection with Jasmin.

In a lot of interviews, Aly Goni has revealed that Jasmin has made him a better person and life is beautiful with her. Since both of them are extremely creative, their union will bring success for both of them.

Read More- Jasmin Bhasin: From a Hotel Management Trainee to an actor, she is here to slay!

Our celebrity astrologer Poonam Gaur has suggested to Aly Goni to take care of his expenses. A little bit of savings can do wonders to his bank balance. Well, Shaadi is definitely on their cards and they will tie the knot in near future. In an interview, Jasmin said she needs a little more time to settle down but Shaadi is on her mind. Recently, there were reports on their secret marriage. However, Jasmin has denied all the reports and said – Jab Bhi Hogi Sab Ko Pta Lag Jayega.

Jasmin and Aly first met on the sets of Khatron Ke Khiladi in the year 2019. They started off as friends and now they are soulmates. After all, they say – Pyaar Dosti Hai. Talking about their work life, their union will bring luck for both of them. After getting married both of them will flourish in their career. 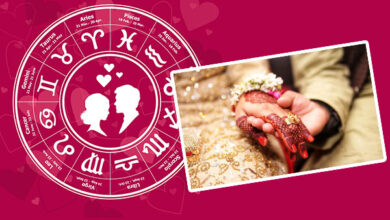