How Tejashwi is attracting eyeballs in the Assembly Elections 2020

The Bihar political landscape is changing gradually as a new set of young brigades such as Tejashwi Prasad and Chirag Paswan is taking on the veteran leaders head-on before the state Assembly elections and giving them a run for the money.

The promise of Mahagathbandhan’s CM candidate Tejashwi Prasad Yadav to create 10 lakh government jobs for the people in Bihar if the Grand Alliance forms the government has given a much-needed momentum to the Tejashwi Prasad Yadav’s prospects as thousands of people are attending the election rallies of Tejashwi Prasad. The lucrative offer has been very successful in forcing people out of their homes amid the corona scare to listen to Tejashwi.

Read more: First Phase Bihar Election 2020: What is at stake in the first phase? 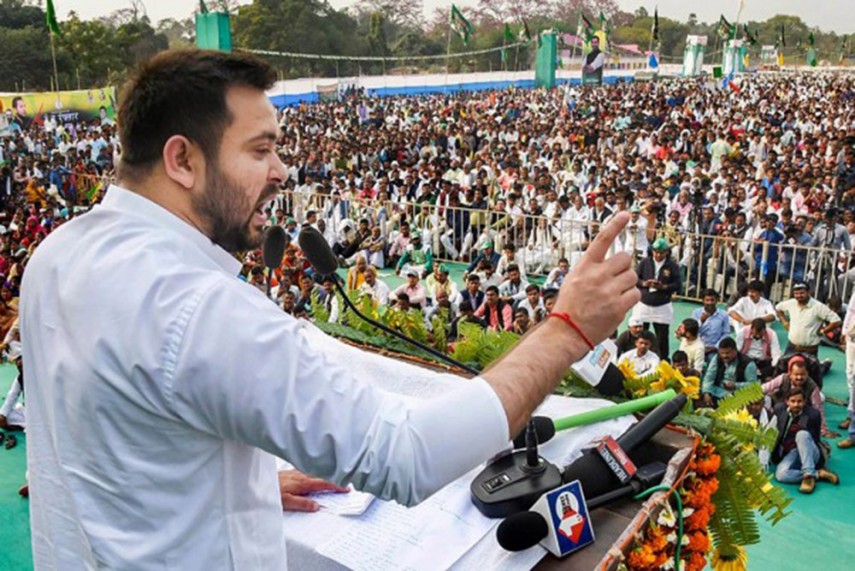 The heated campaign trail of the RJD has shown a new ray of hope for the grand alliance against the mighty NDA, which comprises Janata Dal-United and BJP. Tejashwi, the youngest candidate for CM, has not been just drawing bigger crowds than CM Nitish Kumar and others but also setting agenda for the election.

Political pundits believe that the anti-incumbency factor is working against Nitish Kumar and the poorest class of people due to alleged flawless policies which have hit the poorest hardest.

The vision document of Tejashwi-led ‘Mahagathbandhan’ lays out 25 points, including non-implementation of new farm laws, loan waiver for farmers, zero travelling charges for students from district headquarter to examination centres, zero-fee for competitive examinations and more.

These have struck a chord with the backward sections and the unemployed youths of the society and the people are now considering to go in the pursuit of a new and young face of Bihar politics.

The new Tejashwi has a different approach this year

Tejashwi’s speeches are now becoming a dialogue with the crowds, an improvement from the 2019 general election campaign, where the RJD leader consistently attacked PM Modi and CM Nitish without interacting with the crowd nor raising the important, relevant and relatable issues.

The 2020 campaign of Tejashwi is more focused on asking the pointed questions on the work of state government in health, education, law and order and other important sectors. He often switches to the local dialect — Bhojpuri to connect with the audience.

RJD is a more of a caste-based party, most probably because of the Lalu Prasad Yadav’s attention at OBCs, Muslims and Dalits. In a break from his father’s politics, the 30-year old, also the youngest son, avoids speaking about caste conflicts at all. Moreover, he has indicated that the promise of government job is for all castes. In one of his speeches, he said, “Rise above caste and creed to vote for me.”

The new face of RJD, Tejashwi, has decided to target the weak spots of the current government. He doesn’t miss the chance of reminding people of Nitish Kumar’s special status demand for Bihar. He asks “Is it Donald Trump who will give special status to Bihar.”

Talking about establishing new industries, a sector where Kumar’s government has severely failed and tackling the rampant corruption has definitely helped Tejashwi’s cause.

Understanding the Uproar on Prophet Muhammad's cartoon in France: Know the latest updates