Happy Vasant Panchami! Here is all you need to know about worshipping Goddess Saraswati

Highlights hide
1 Happy Vasant Panchami! Here is all you need to know about worshipping Goddess Saraswati
2 Saraswati Puja and its Significance
2.1 The Mythological story behind the creation of the World
3 How to perform Saraswati Puja?
3.1 Liked this post? Register at One World News to never miss out on videos, celeb interviews, and best reads.

We all feel proud and lucky to be Indian because it is the land of festivals. And festivals mean time to enjoy and have fun. Indian festivals impart us wisdom too along with fun. There are hundreds of festivals that people of different religions and cultures celebrate together. Vasant Panchami will be celebrated on January 26th this year. So, we have two occasions to celebrate on the same day, other being our Republic day.

It is believed that Vasant Panchami marks the birthday of Goddess Saraswati, so the festival will be celebrated along with the Saraswati Puja. She blesses the world with knowledge, wisdom, art speech and music. So, Saraswati Puja is done by devotees on this day. During Saraswati Puja, various rituals are followed. Apart from this, the day is also the harbinger of spring season. It is that time of the year when the mustard fields bloom with beautiful yellow flowers. Therefore, yellow is the theme colour for Vasant Panchami. 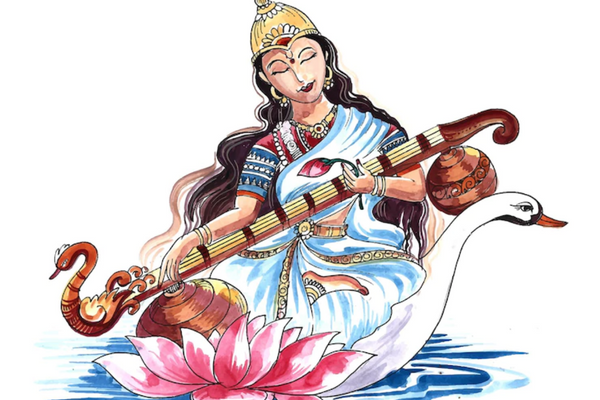 Saraswati Puja and its Significance

The Mythological story behind the creation of the World

As per Hindu Scriptures, Universe was created by Lord Brahma. But he was upset, as all his creation was quiet and still like a dead body. There was no sound or music in the universe. In short, there was no life in the universe. Lord Brahma became sad after seeing all that. Brahma went to Lord Vishnu and told him about his feelings after creating the universe.

Lord Vishnu suggested to Brahma that Goddess Saraswati will help him and will solve the problems. So, Lord Brahma evoked Goddess Saraswati. When she emerged, then on request of Brahma, she gave life to Brahma’s creation through her Veena (Lute).

When she started playing the instrument, the first letter that came out was ‘Sa’. This swar is first among the seven musical notes (the seven Swaras). Like this, the soundless universe got sound, a heart got its heartbeat. Lord Brahma became happy with this and he named Saraswati as Vageshwari. She holds Veena in her hand and hence, she is also called ‘Veenapani.

How to perform Saraswati Puja?

To perform Saraswati Puja, a stoup (Kalash) is enshrined. The rituals start with worshipping Lord Ganesh. Later, Lord Vishnu and Lord Shiva are also worshipped. After worshipping them, devotees worship Goddess Saraswati. She is bathed and adorned in white clothes. Vermillion and garlands are offered to her before starting the Puja. Gulaal (red coloured powder) is offered on her feet. While performing Saraswati Puja, yellow flowers and seasonal fruits are offered as Prasad.

As we celebrate Vasant Panchami, it signals the end of winter and welcomes the fun-filled season of spring. People express their joy in various ways. One of the ways is by flying kites and thus welcoming Vasant Panchami. Various regions in India organise kite-flying competitions. Person whose kite remains the longest in the sky is declared winner.