Yes, most Indian laws are in Gender-Biased, but there are some exceptions in which the court heard Men Ki Baat.

Does IPC Section 498A give way too much power to women?

Gender-biased Laws :The Indian marriage system is a HUGE gamble for men. There is nothing you can do to ‘save yourself’ from false cases being filed against you. You can only attempt to prove your innocence in court. Apparently, Indian lawmakers probably believed that ALL Indian men are evil monsters while all Indian women are angels from heaven. So, they did not provide ANY legal protection for men under the Indian Penal Code. No laws in India are gender-neutral. However, there are some surprising incidents that took place in these years, which have done Men Ki Baat.

Here are some instances where court made an attempt to neutralize gender-biased laws to some extent.

Does IPC Section 498A give way too much power to women?

A few years back, the apex court pronounced its verdict in favour of men’s rights activists.  In 2017, Men Rights Activists moved to the Supreme Court seeking relief from domestic violence against men. The day went lucky for them as the court said that ‘the men were victims of domestic violence’.

Well, the Supreme Court did not make the law gender-neutral but cited that women were filing a bogus case against their husbands in domestic violence cases. Reading the judgment, the bench said, “most domestic violence cases that were reported were done out of danger over trivial issues. Women did not visualize the consequences and implications of dragging their husbands to a court.”

Read More- ‘During a Fight I realized she was the One’, 10 Men revealed when they felt ready to say I Love you!

However, the judgment left the women group unhappy. As per these women groups, the court was concerned more to preserve marriages and extended families. Later, more than 16 women groups appeared before the chief justice of India to reverse the Supreme Court decision.

Society often believes that a man being assaulted by a woman is “less manly,” and mocked their situation. This restrains them from coming out and talking about their problems.

In 1988, Ram Prakash Chugh started the men’s rights movement in India. He drew the nation’s attention to Section 498A of the IPC, which is dowry law. The law protects women’s interests when it comes to violence, sexual harassment, abuse, and other cases where the bride’s side fails to pay the dowry.

In 2014, the Supreme Court of India relaxed the provisions that empowered police to make an arrest against a man who is a regular offender of dowry law.

This section already declares a man on the faulty side. But the biggest question here is, do men also get raped?

A Chennai-based man’s blog post got viral when he shared his rape story. In 2013, the Centre passed its stopgap Criminal Law (Amendment) Ordinance, which substituted “sexual assault” for “rape” and made the crime gender-neutral from the aspect of both victim as well as perpetrator. Yet this was, in effect, a mixed bag. While the recognition of male victims and female perpetrators was solved, it did not use the word “rape”, which was a significant omission. 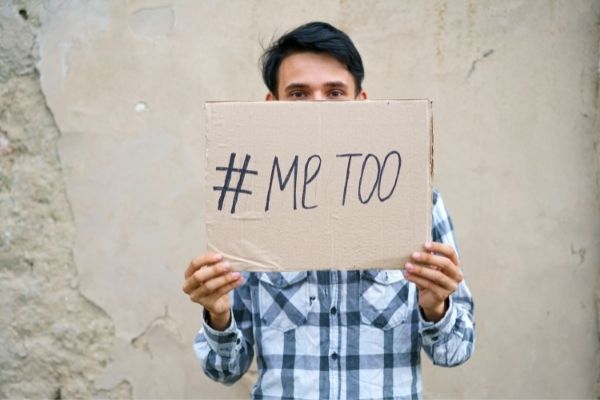 One more crime that is the worst of all. That is acid attacks. In many cases, we have seen courageous women who bravely faced the world even when their faces were destroyed by male ego. However, acid attacks are also not gender specific. As per the report of the National Crime Bureau, 30-40% of acid attack victims are men.

In 2021, a man died of injuries after his girlfriend threw acid on him when she learned that the man was going to marry someone else.

Chandrahass Mishra now a coordinator with the NGO Acid Survivors and Women Welfare Foundation is an acid attack victim himself told, “The Supreme court had ordered ex-gratia of ₹3 lakh for ALL the acid attack victims. However, the reading of the state government authorities was that ONLY women victims are entitled to it.” Another case of gender discrimination.

A young female lawyer Ahuja Kapur who is also a criminal psychologist says, “There is a societal presumption that only women are acid attack victims. However, the landmark Supreme Court’s 2013 guidelines prescribed compensation and rehabilitation, which were meant for all victims. Gender discrimination was infused in the rules by state governments”.

Indian men like to show off their bravado and also are too shy to ask for laws for their own protection. There are rapes against men, yet the rape law are gender-biased. There is extortion by the bride’s family too. There are some cases where the brides have bumped off the groom’s family. However, we never see the entire family being arrested on the statement of a groom!

If you are facing any similar problem, do not hesitate to share with us your Men Ki Baat. Society believes it or not, we do believe that men too are preyed on heinous crimes.

5 Psychological Signs to Decode Your Crush Also Has a Crush On You!