Here are the important facts you should know about Ganesh Chaturthi

All festivals in India are occasions to meet our loved ones. Each festival has its own significance. One such important festival is Ganesh Chaturthi. It is a 10-day long affair that is widely celebrated in the state of Maharashtra and its adjoining places. But now, Delhi, Madhya Pradesh, Karnataka, and Telangana also celebrate Ganesh Chaturthi with great glam and grandeur.

This year, the festival will be observed from 10 September to 19 September 2021. On the 11th day, devotees give a farewell to Lord Ganesh with heavy hearts in the hope to see him again next year.

In this regard they chant a popular rhyme,

What is the Significance of Ganesh Chaturthi?

Vinayak Chaturthi is a festival of rejoicing Lord Ganpati, son of Lord Shiva and Goddess Parvati. As per the Hindu calendar, the auspicious parv is observed in the month of Bhadra.

The festival begins on Shukla Chaturthi which is the fourth day of the waxing moon. It ends on the 14th day known as Anant Chaturdashi.

Ganesh has 108 names and is known to ward off the evil eye. Lambodar, Vighnaharta, Ekdant, Gajanana, and Mushivahana are some of his popular names. Ganpati is the God of buddhi, wisdom, knowledge, commerce, and intellect.

How did it start?

Chhatrapati Shivaji was the first to make this festival a public and social event. When the British captured India they halted the celebrations of Ganesh Chaturthi and were only restricted to home celebrations.

In 1883 revolutionary freedom fighter Lokmanya Tilak urged people to come together to celebrate Ganesh Chaturthi. Tilak was the first to install large public images of Ganesh in pavilions. He established the practice of submerging the idols in rivers, seas, or into any other water bodies on the 10th day of the festival. 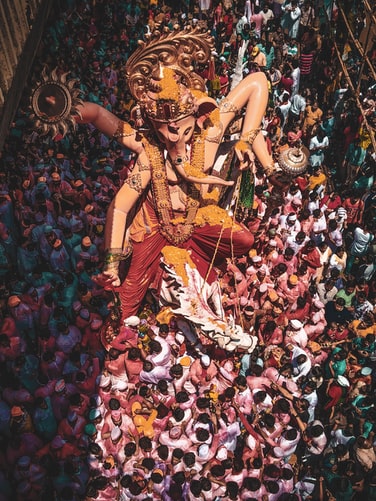 Tilak recognizes Ganesh, a god for everybody to bridge the gap between Brahmins and non-Brahmins. The idea behind Sarvajanik Puja is to develop grassroots unity among Maharashtrian people to oppose British colonial rule.

The festival facilitates community participation and involvement in the form of intellectual discourse. Poetry recitals, plays, concerts, folk dances become a routine between these 10 days.

The popular sweet dumplings called Modak are believed to be Lord Ganesh’s favourite food. Hence, during Lord Ganesh’s worship ceremonies, the pooja always concludes with an offering of 21 Modaks to the deities and then served as prasad. 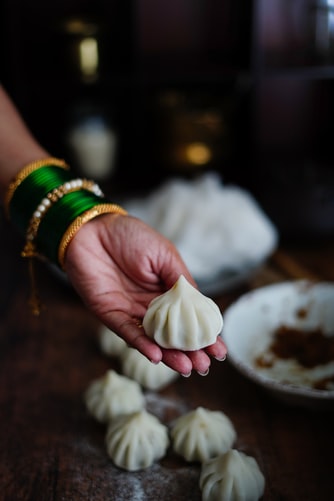 Modak is made of coconut and jaggery which makes it healthy and delicious. Coconut is easy to digest and boosts our metabolism. It increases good cholesterol and helps in fighting bacteria.

Jaggery fights cold and flu as it detoxifies the liver and activates digestive enzymes. The secret over here is streaming. Steaming retains 90% of antioxidants, as well as retains colour, texture & favour of food. It also preserves nutrients, vitamin B & C, phosphorus, and zinc.

Labaugcha Raja is considered the king of Lalbagh and Mumbai. It tops the list of popular Ganesh pandals in Mumbai. Founded in the year 1934, the pandal is throng with over 1.5 million devotees on an average day. It is also believed that this idol of Ganesh is a Nava Sacha Ganpati, which means one who fulfils all the wishes.

The other famous pandals in Mumbai are Andhericha Raja, Ganpati of GSB Seva Mandal, Chinchpoklicha Chintamani.

On average over 1 lakh households and 20,000 sarvajanik Seva mandals come to natural and artificial spots for immersion over 11 days every year.

7 Things Smart People Will Never Do