In view of heavy rains from past two days a flood alert has been issued in various districts of Uttar Pradesh.

All major rivers are flowing above the danger mark and some have even crossed their boundaries.

As the Sharda and the Ghaghra rivers crossed their danger mark in the Lakhimpur Khiri and Barabanki, the flood threat loomed over several districts.

According to reports, around 11 people lost their lives in the rain related accidents in different parts of Uttar Pradesh in last two days. 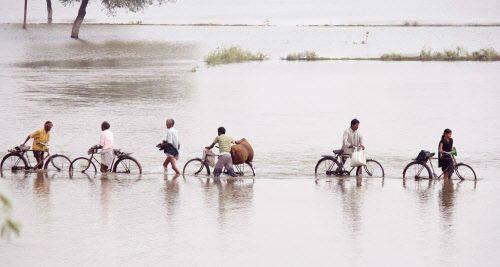 The teams established to help the affected have started working in various districts of the state including Pilibhit, Lakhimpur Khiri, Basti and Bahraich.

The water of river Ganga entered into the Rasulpur village of Amroha. The district administration has issued a flood alert for twelve more villages.

In Kushinagar, river Budhi Gandak is also overflowing due to the water released from Balmikinagar barrage and the continuous rainfall in upper past of Nepal.

Though still below danger mark, river Ganga is continuously rising in Kanpur, Allahabad and Varanasi.

Have a news story, an interesting write-up or simply a suggestion? Write to us at
info@oneworldnews.in
Tags
featuredhomeews Flood Uttar Pradesh