The Ukraine President picks up arms against Russia to defend his country!

Couple embracing their love amid the Russian-Ukraine crisis!

In a 27-February agreement with Russia, Volodymyr Zelensky of Ukraine decided to have Ukrainian officials participate in talks “without preconditions,” even as Russian President Vladimir Putin heightened tensions by putting his nuclear forces on alert.

Before this, various clips and pics circulated on social media claiming either to be from the ongoing war scenario or from a recent one. However, our OWN fact check found some discrepancies in the same.

The Ukraine President picks up arms against Russia to defend his country!

I don't know who is wrong and who is right but the President of Ukraine won the heart, he is not going in fancy dress to fight with the army with army uniform and said "The enemy will not see our back"
Whatever may be the situation, the person does not bow down .#DefendUkraine pic.twitter.com/G6SPULYYJR

Fake news: A set of photos of Ukraine President Volodymyr Zelenskyy is being shared, claiming that he has donned the military uniform to join the Ukraine defense troops in the frontline to defend his country. With the same narrative and varied captions in Hindi and English, the pictures of him are shared with the similar message that he was a true leader who stood beside his citizens at a time of war.

Read More- Russia-Ukraine War: Who Will Get The Benefits From The Ongoing Crisis?

Fact-checked: The viral claim is false. Volodymyr Zelenskyy, wearing a bulletproof vest, not a military uniform, is pictured in old photographs as if he had joined the Ukrainian defense forces on the front lines to defend his country.

‘The present situation in #Ukraine is highly uncertain. Stay where you are, avoid travel to Kyiv.’

The @MEAIndia control room is also being expanded and made operational on a 24×7 basis.#RussiaUkraineConflict #WWIII pic.twitter.com/TFptaXcyVJ

Fake news: Amid the ongoing invasion of Ukraine by Russia, several videos and images are being shared claiming to be from the conflict. An Indian media outlet shared a video of fighter aircraft flying low over a residential area, claiming that they were Russian planes flying over various Ukrainian cities. Indian media outlets such as DNA, Zee News, Times Now, among others, shared the video with a similar claim.

Fact-checked: The viral claim is false. Russia observes Victory Day on May 9 to commemorate the surrender of Nazi Germany in 1945, and the parade follows the celebrations. A former village and town located in northern Moscow, Russia, where the video was taken while the parade rehearsal was going on.

Fake news: Against a backdrop of escalating tensions at the Russia-Ukraine border, a video showing an on-ground weapon system downing a fighter plane has gone viral as “live war footage.”

Fact-checked: The fact behind the video is quite hilarious. The viral clip was a video game replica from a game called ARMA 3. Therefore, it is unrelated.

Fake news: There have been reports of Russian attacks on various parts of Ukraine, and a video of a massive explosion has gone viral, claiming that it depicts a “Russian airstrike setting off a chain reaction at Luhansk power plant.”

Read More- Russia-Ukraine Crisis: How It will impact India

Fact-checked: The video in question showed an explosion that took place in the Chinese city of Tianjin in 2015. Therefore, it is an old video.

Couple embracing their love amid the Russian-Ukraine crisis!

Fake news: A pic is going viral on social media where a man has draped the Ukrainian flag around himself, while the woman is a Russian flag wrapped around her.

Fact news: The image was first captured back in 2019, reports The Washington Post. During a Belarusian rapper Max Korzh concert in Poland, Juliana Kuznetsova attends with her fiancé.

If you come across any news on the same line, mail it to us on ayushi.oneworldnews@gmail.com.

An Evening to Remember, Minu Bakshi mesmerized the audience with her Power Packed Performance! 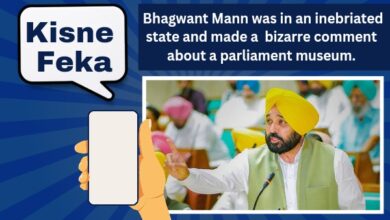