Here are some fake news that grabbed our attention

Here are some fake news that grabbed our attentionCirculation of fake news on social media platforms has become a new normal for most of us but what remains a task is to identify what is real and what is fake news. Here are a few most widely circulated news stories recently that turned out to be fake and misleading.

Here are some fake news that grabbed our attention. We debunked it with a fact-checked

Protest Against Modi during US visit!

Some posts claimed that Anti-Modi protests were held in the United States during Modi’s recent visit.

The viral pictures showing Anti-Modi posters are from 2019 and not related to PM Modi’s recent United States visit.

This newspaper is exclusively printed by those who believe that the correct spelling of strength is STREANH !!!#SETPEMBER pic.twitter.com/gQk8pIrnZD

The New York Times front page image was shared widely which features Indian PM Narendra Modi and captioned it “Last, Best Hope Of Earth”. It was said to be dated on 26 September 2021.

The image is fake and The New York Times did not post this article. Moreover, the spelling of September is wrong and the small caption that reads, “His highness, Modi ji is signing on a blank A4 paper to bless our country. Har har Modi.” also makes it obvious that it is edited.

A photo from a media briefing held by Opposition leaders was shared on social media. It claimed that Bhartiya Janta Party leader Subramanian Swamy attended the meeting and has joined the opposition.

Congress leader Manish Chatarth clarified India Today that the man in the brown Jacket is him and not Dr Swamy.

BJP Bihar General Secretary (Organisation) Nagendra Nath Tripathi claimed in a tweet that former Supreme Court judge Dalveer Bhandari is elected as the Chief Justice of the International Court of Justice (ICJ). He lauded PM Modi for the achievement, claiming that his hard work has nurtured good relations with countries across the world.

According to the ICJ website, there is no Chief Justice post. The court has 15 member judges along with a president and vice president who each serve for three-year terms. In February 2018, Bhandari was re-elected as a member judge for a nine-year team.

Shahrukh credits Muslims for his success! 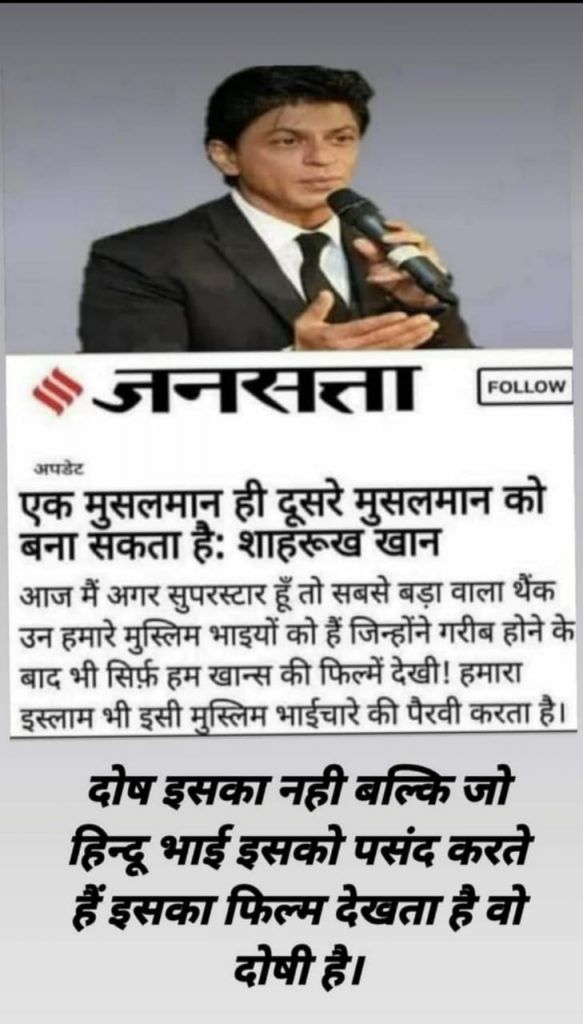 An article purportedly published by Jansatta claims that Bollywood actor Shahrukh Khan credited Muslims for his success in the industry. The article is being shared on social media with a communal narrative.

While going through the viral screen grab on social media, we came across a clarification issued by the official Twitter handle of Jansatta. The handle posted the viral screengrab on Twitter and wrote in Hindi, reads, “Some people are sharing this on social media in the name of Jansatta, but let us tell you that it is entirely fake. No such news has come to the public.”

Tell us in the comments, which news surprised you the most.