Here are three entertainment News that will leave you shocked. Do not forget to read no.3!!

Anagha Bhosale announced her departure from the show, ’Anupama’!

Entertainment News: This week the entertainment industry is lined-up in providing one after the other shocking news. Some celebs wished to quit the industry while some announced breakup leaving their fans in shock.

Here are three entertainment News that will leave you shocked.

Shweta Bachchan’s daughter, Navya Naveli Nanda has made it to the headlines with her sexist allegation towards her mother and her brother, Agastya Nanda. She had revealed that being a girl she was expected to do more household chores. Shweta has finally opened up about the true situation in their home and responded appropriately to her daughter.

It all started when last month, in an interview with Navya told SheThePeople that she experiences sexism at home. She had revealed that when guests come over, her mother always tells her to get up, get stuff, and play host.

Read more- Navya Naveli Nanda is inspiring AF! Here is why we look up to her?

She revealed that her daughter, Navya’s statements are false and that is not how their family functions. “When guests come over, she works while Agastya and Navya sit there and look cute,” said Shweta. She further explained that she and Navya argued after she made the media statement. She shared that she was shocked and had asked Navya how she could say this about them. Shweta said:

“We had a big argument with her. Navya, Agastya, and myself. We asked, “How can you say this about us?” This is not how our house works.”

In an interview with ETimes, Anupamaa’s famed actress Anagha Bhosale announced that she would no longer act. Moreover, this news has left her fans extremely surprised. In an interview with Etimes, she said, “There is politics, unhealthy competition, a race to look flawless and slim all the time, and a constant pressure to post on social media.” Those who do not do these things are left behind.

“I realized that these things did not mesh with my thought process.” She added that she has decided to quit showbiz forever.” She added, “I realized that it was time to move on.” At home in Pune, I am more relaxed and content. I want to follow Lord Krishna’s teachings and improve my spiritual life. I want to attain peace, contentment, and happiness in my life.”

According to a  report by PinkVilla , Shamita and Raqesh have parted ways a day before yesterday as they were clashing on several things. “Things did not work between them,” says a source close to Raqesh. They were clashing on too many things and hence, they decided to separate.” 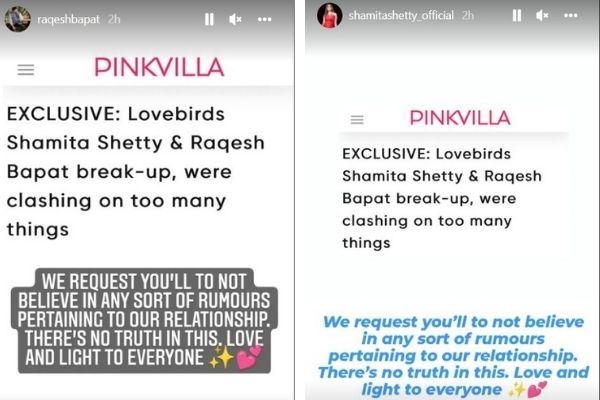 However, both Shamita and Raqesh took a dig at this and quashed all such breakup rumors. They both posted a screenshot of Pinkvilla’s story associated with their breakup and wrote, “We request you all to not believe in any sort of rumours about our relationship. There is no truth in this. Love and light to everyone.”

Therefore, it comes out as fake news.

This has come as a sigh of relief to ShaRa fans who desperately want to see them together and even get married.

For more day-to-day entertainment updates do not forget to check out our Instagram page.

Best 5 Toxin-Free Sunscreens that Suits Your Pocket, and the Indian Climate