Sheeran seems to have mates at high places, hangs out with Prince Edward

The famous English singer and songwriter Ed Sheeran was seen enjoying the match between Arch-rival England and Australia at the iconic ground at Lords in London. Famous for “Shape of You” song, Ed Sheeran was spotted chilling with a beer in a casual T-Shirt and jeans. 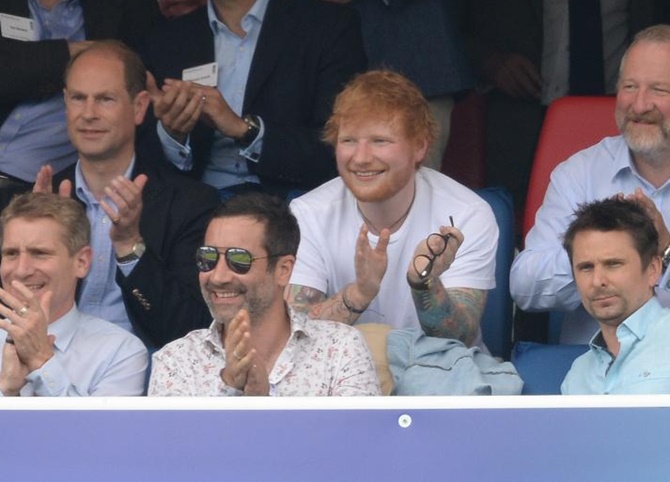 The singer has recently announced his upcoming album No. 6 Collaborations Project which also features Justin Beiber, Eminem, Bruno Mars, 50 Cent, Camila Cabello, Stormzy and more. One song “I Don’t Care” has already become a big hit from the album.

"I'm not in love with the shape of @englandcricket"#EdSheeran#ENGvAUS #CWC19 #WorldCup2019 pic.twitter.com/Vkur8PEEpe

The famous English singer was there to support the home team which didn’t end well for him as England faced a humiliating defeat by Aussies. England chose to bowl first looking at the weather and condition but they failed to capitalize it.

His upcoming album No. 6 Collaboration project was announced on 23rd may which is a follow up of previous 5 projects. The album will have 15 songs in which two have been already released.

I Don’t Care featuring Justin Bieber released on 10th May, Cross Me featuring ‘Chance the Rapper’ and ‘PnB Rock’ released on 24th May. The next song of the album Beautiful People featuring Khalid will release two days later on 28th June.

What Are The Benefits Of Hiring SEO Company?