Significance of Dussehra & different tales associated with the festivals

Dussehra is the festival celebrated to commemorate the victory of Ram over the ten-headed king Ravana. This is perhaps the most popular tale that every Indian associates with the festival of Dussehra.

When Ravan abducted Sita, Ram and his brother Lakshaman along with Hanuman and the Army of vanar, waged a war against Ravana. The conflict culminated with the defeat of Ravana and his death in the war. This happened on the day of Dussehra. People celebrate the occasion by burning effigies of Ravana. It is said that before Ram left for Lanka, he had prayed to Durga for his victory. 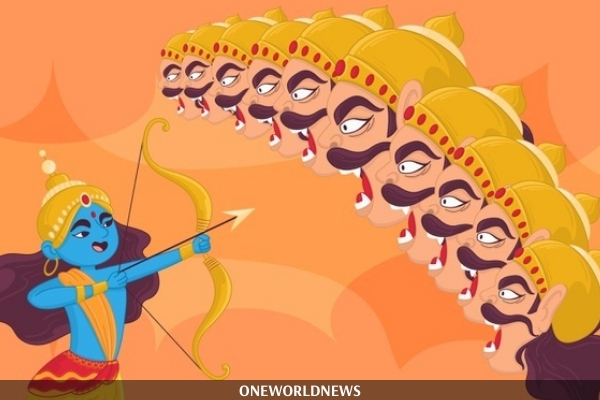 A lesser-known story associated with Dusssera took us to Ayodhya. There lived a boy called Kautsa, the son of a Brahmin called Devdutt, who had pursued his education from Rishi Varatantu. When it was time to pay Gurudakshina, the rishi asked him for 140 gold coins. Unable to fulfill his Guru’s fees, Kautsa requested the king to help him. His wish was answered when Kuber, the god of wealth showered gold coins from the sky near the Apati tree. Kautsa collected the gold coins and paid his Gurudakshina. He distributed the remaining coins to the poor on the day of Dussehra. Since that day, people offer leaves of the Apati tree to each other, considering them to be a symbol of gold.

It is a Season Of War – Simolanghan

The festival of Dussehra also marks the beginning of the war season. It is said that in ancient times kings used this festival to cross borders and fight against neighboring enemies. This custom was known as Simolanghan.

The celebration of Dussehra in India, however, started in the 17th century when the king of Mysore ordered the celebration of the occasion on a large scale. Since then, Dussehra is celebrated with great pomp and enthusiasm. This festival is symbolic as it enables people to win over their fears and celebrate the victory of good over evil.

In some parts of North India, Dussehra is observed as a special bond between brother and sister. On this day, the sister applies tika and puts homegrown Jau (barley grass) on the brother’s ear. Jau is a symbol of prosperity and abundance. Often, a big lunch or dinner feast for sons-in-law and married daughters.

In the state of West Bengal, married women play a ritual known as Sindoor Khela. On the 10th day (VijayaDashami), the Idol of Goddess Durga receives a grand farewell in the form of processions with songs and traditional dance. Then, Devi is immersed in the holy water. It is believed that flow of water will unite her again with her husband Lord Shiva and children.

Fact Check:  Was there no Shubh Muhurat for Bhoomi Pujan, we decided to verify the claim?

On this day, there is a tradition of worshiping weapons, instruments, pencils, pens, and tools as all these are used against fighting injustice, evil, and ignorance.

Melas (fair), Ramleela, Ravan Dahan, joy rides, and Garbha are the inseparable part of this occasion. Although 2020 was a tough year for many and the festival of Dussehra was also affected by the corona pandemic. However, this year the government has loosened its restriction to a certain extent. In many places, Ram Leela and fairs are taking place in the light of covid protocols.

How are you going to celebrate Dussehra this time?