Highlights hide
1 Chef Ruchit Harneja spearheads ‘Musaafer by The Spice Route Company’ in Houston, Texas
1.1 Has it been a smooth road? If not, what were some of the struggles along the way?
1.2 What are your specializations? What sets you apart from others?
1.3 Where do you see your industry going in the next 5-10 years? Any significant shifts, changes, trends, etc.?
2 Liked this post? Register at One World News to never miss out on videos, celeb interviews, and best reads.

Chef Ruchit is a graduate of the Institute of Hotel Management in Bangalore and is currently the executive pastry chef at one of the luxurious Indian restaurants in Houston – Musaafer by the Spice Route Company.

Chef Ruchit is not only well-known for his flavours, techniques, and expertise in Indian desserts but also for his creative food presentations. He has a unique style of incorporating the unusual Ayurvedic spice blends he invented for Indian desserts.

He is probably the only Indian pastry chef to invent desserts that are anti-depressant and fatigue-boosting in nature with the use of his spices. For example, using ingredients like fresh green chillies, garlic, ginger, fish and meat in Indian desserts is against the orthodox world of food pairing. You’ll find such ‘not to do’ food pairings in most of his desserts in a fascinating way.

He took India’s ethnic cuisines like Kayastha cuisine (courtly cuisines of India) and Rampur cuisine to the global stage. 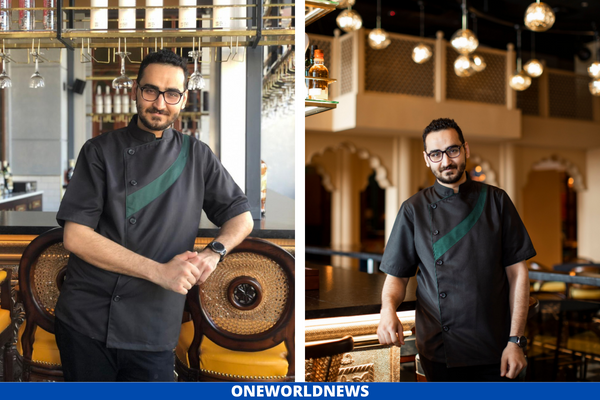 In an exclusive interview with OWN, he talks about his journey. Here are the excerpts:

Can you briefly walk us through your story – how you started and got to where you are today? You can include as little or as much detail as you’d like.

I grew up in Jaipur – the pink city of India, where I learned all about Indian royal food and the delicious royal desserts.

Since my early childhood, all my hobbies have revolved around food and cooking. I started cooking the day I could reach the stovetop.

My inclination towards pastry arts became stronger after winning the Alfresco Masterchef Baking competition at IHM-Bangalore. I used to be always mesmerized by the meticulous art, creatively balanced flavors and skill-based techniques. Soon after, I took over pastry operations at The Taj Mahal Hotel in New Delhi.

I did a short stint managing pastry operations at the Andaz Delhi – A concept by Hyatt before heading to the United States to conceptualize the pastry program at Musaafer Houston, one of the most lavish, massive and show-stopping neo-Indian restaurants.

Has it been a smooth road? If not, what were some of the struggles along the way?

Learning the nuances of cooking from my mother and grandmother, I articulated the fame I currently hold.

In support of my father, I brought his dream of establishing a small eatery in Jaipur called ‘Ravee’s Kitchen’ to fruition. I learnt a knack for creative and sustainable cooking from that project.

The most cherished joy of cooking for family landed me in a challenging situation that called for certain recipe modifications as my family history is of severe diabetes.

It gave me a spectrum to look at desserts from a different angle. I gathered a ton of information and conducted research that says ‘healthy dessert eating is not a myth’.

I armed myself with knowledge of applied nutrition & food science from the tips I used to get from my mother, as that’s her core competency and educational background.

My research proves that eating desserts in moderation with the right ingredients after a meal aids digestion and nourishes the spleen.

What are your specializations? What sets you apart from others?

I have gained a reputation as a chef traveller thanks to my perpetual food journeys. I embarked on the most ambitious 100-day food journey across the 29 states of India and came up with some of my finest dessert creations which are a signature of my imagination.

This journey was made to explore varied Indian desserts and pastries and learn ancient and traditional recipes from each region. The knowledge I gathered from my trip has not only added depth to my expertise but also helped me achieve my mission to provide an educational tour to American diners.

Learnings from my food trail made me a master of delicacies from the courtly cuisines of India, like Kayastha cuisine, Rampur cuisine from the Mughal era, and Awadhi cuisine.
I got an opportunity to learn in the royal kitchens of the Khansamas, where every recipe has been secretly preserved for centuries.

I travelled to plenty of tucked-away places to fetch recipes that are not in the mainstream and those dishes are barely found on any menu cards here in the United States like bebinca from Goa, Ghevar from my hometown Jaipur, Makhan malai from U.P, Qubani ka meetha from Hyderabad, endless varieties of Halwa from North India and Mishti doi from Bengal.

My triumphs of exploration took me across the world to take master classes with some of the world’s most renowned pastry chefs, including Chef Antonio Bachour, who was named as one of the “Top 10 Pastry Chefs in America,” Chef Carles Mampel, who was selected as the Best Euroamerican Pastry Chef, and Chef Marike Van Beurden, the award-winning pastry chef at the Four Seasons Hotel in Hong Kong.

I travelled to France and Belgium to learn the extensive chocolate arts at the Callebaut chocolate academy; to Italy to learn the art of ice cream, gelato, and frozen desserts at the International School of Gelato, Rimini. I studied the deep science of molecular gastro art at SOSA ingredients, Spain. Next. I have been credited as a savant regarding heterodox food pairings (negative food pairings) in contemporary Indian desserts inspired by legendary creations.

My mission is to astonish, surprise, shake up guests, and see a childlike sense of wonder on their faces.

Where do you see your industry going in the next 5-10 years? Any significant shifts, changes, trends, etc.?

Indian cuisine is at the cusp of the new food revolution! That fine cuisine offers countless experiences across the spectrum of delectable dishes. The audience that benefits from this exposure is expanding with remarkable global restaurant openings.

As per statistics, Indian cuisine has the fastest growth rate, mainly because of its diversity.

Ayurveda, India’s medical science, is known as a natural treatment for several body ailments. The Ayurveda principle is based on eating healthy and nutritious Indian food. Indians also practice a fitness exercise called yoga, which includes sattvic Indian food. Both Ayurveda and yoga have grown in popularity worldwide, making more and more individuals appreciate the health benefits of Indian cuisine.

It is without a doubt that Indian cuisine has exerted an influence on many nations all over the globe. This is why more and more restaurants and famous chefs are drawing inspiration from India’s cooking techniques and indigenous ingredients.