Want to explore independent filmmaking experiments? Here are the top 10 Indie films that are a must-watch

Are you confused about which film to watch from the hundreds of independent films available on all the OTT platforms? Well, we are here with a solution for this. Here are the top 10 indie films that are one of the best films produced in the last few years.

Prateek Vats’s ‘Eeb Allay Ooo!’ is a film that has received absolute appreciation this year. The film is about a monkey chaser and a tragedy that is a design of the system of the country. It reflects the plight of the migrant workers and is wonderfully put by Prateek Vats. The film reflects the class dominance and humiliation and struggles of finding the self-identity of a monkey chaser. The film was among the four Indian films that got screened in the online film festival “We Are One: A Global Film Festival” and many more to count.

Among all the films on this list, we would like to give special recognition to this film. Why? Because it is perhaps one of the most beautifully shot experimental films of India. The best part is that the film has no dialogue at all. It is just visual storytelling. Directed by Aditya Vikram Sengupta, the film reflects how a middle-class couple manages to do alternate shifts to make the ends meet and hence, don’t get a chance to even see each other. Yet, their love is so strong that they support each other in every sense.

Needless to elaborate upon who Sahadat Hasan Manto was, Manto is the film based on a part of Manto’s life. The film directed by Nandita Das traces back the life of Saadat Hasan Manto, who, from being an established writer in Bombay was forced to flee to Pakistan due to increasing tensions among Hindus and Muslims. The character of Manto is played by  Nawazuddin Siddiqui  with Rasika Duggal as the supporting actress

Soni, a film directed by Ivan Ayr is about a young policewoman, working in Delhi to address the growing crimes and crises against women. The woman receives significant setbacks through her journey and it is interesting to watch how she sails through it. 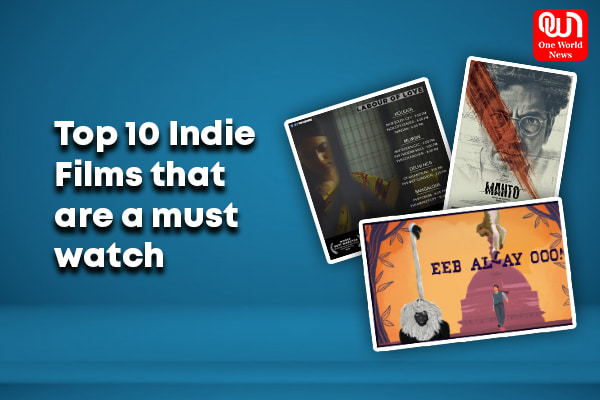 Rohan, after being expelled from his school, returns back to his strict father. His father made him enroll for engineering whereas Rohan wants to pursue a career in writing. The tension between the toxic father and his sons is what this film is all about. It is relatable, it is remarkable, and strongly comments on the idea of generation gap and parenting. Well put by Vikramaditya Motwane, the film has received the Filmfare Award for Best Story and more.

The one thing a person will find after watching this film is love. Based on the caste divide and stigmas around premarital sex, the film is about two interconnected stories moving parallelly in the city of Banaras. With extremely well-structured dialogues, amazing cinematography, and direction of Neeraj Ghaywan, the film is an all-time favorite for all indie lovers.

Based on the true story of Shahid Azmi who was a former militant operative ends up becoming a criminal lawyer. Shahid fights for the victims who are falsely convicted of terror (as he was before starting as a lawyer)happens to meet an unjust end.

This film is absolutely grey. Titli is a boy who wants a break from his gangster family and starts his life anew. As a person, Titli can differentiate between wrong and right for himself but patriarchy has been deep-rooted in his character. He becomes abusive and toxic to his wife and remains her worrier. The film is directed by Kanu Behl and was screened at Cannes Film Festival.

9. Lipstick Under My Burkha

Among the best women chronicles made, Lipstick Under My Burkha definitely stands out. The film, strongly commenting on the wants of women, for freedom and right to even desire something is what the film represents. What should be appreciated about the film is its storytelling and screenplay. How a fictional character of the book, Lipstick Wale Sapne is what is makes the film look different from the other chronicles and all credits for it goes to Alankrita Srivastava

Among the most praised films of Ritesh Batra, starring none other than Irrfan Khan is a film worthy of a watch. Though the film is quite open-ended, what is interesting is the uniqueness of the story. The film was premiered at Cannes Film Festival in 2013 and is an absolute gem.

So, these are the 10 films which we would want to recommend if you want to watch good, indie films. Although, we do know that a lot is being produced every day, so if you want to add any other film to this list, the comment section is open for you. Happy Watching!