Finally, ABVP has topped the Delhi University’s elections as they received maximum votes.

The Akhil Bharatiya Vidyarthi Parishad (ABVP), the student outfit affiliated to the RSS, stopped short of sweeping the students union elections in Delhi University, winning three out of four posts.

The Congress -backed NSUI won one post. The election was held yesterday in Delhi University’s 51 colleges although very few students came for voting. ABVP has won the posts of president, vice-president and secretary of the students union, popularly known as DUSU. The

President), Ankit Sangwan (Secretary), all of whom are from the ABVP. Mohit Sangwan from NSUI was elected as joint 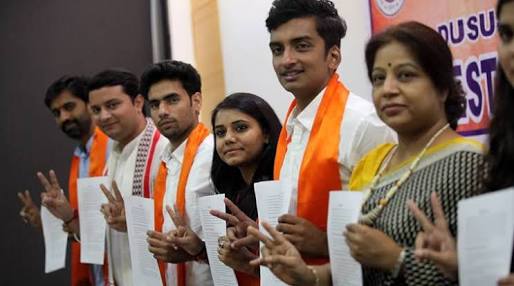 Tanwar, a first year MA Hindi student of PGDAV college, has been active in the ABVP for the last four years.

Well, there is a minor setback for ABVP which had swept all four posts in 2014 and 2015, defeating the predominant NSUI and CYSS (students wing of the Aam Aadmi Party) and AISA. This

year, the CYSS pulled out of the elections as they failed to win a single post last year.

There was a waning interest

for the elections among students in colleges like Ramjas and Hindu.

The elections this year had a substantial number of women, with four of the seven candidates for the president’s post being
women.

The Failed Love Saga of Lord Ganesha and Tulsi