8 Prominent Personalities who died in year 2018

Only few days are left, and then we all will welcome 2019. For some people 2018 was a wonderful year, and for some it was not that great. It became the official year of marriage as many Bollywood stars got hitched this year. Some big political events too happened this year But 2018 claimed lives of many prominent personalities, creating a void that would never be filled. Here is a list of 8 prominent personalities who died in 2018. 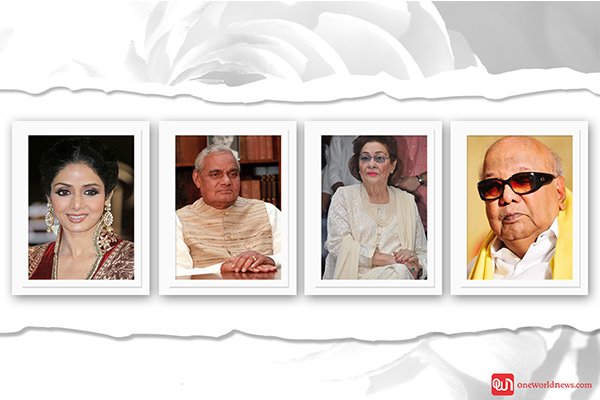 Here is a list of 8 prominent personalities who died in 2018 and the void cannot be filled.

He was one the influential politicians of India. Former Prime Minister passed away this year on August 16, 2018. He was a great leader and a wonderful poet. He has done some remarkable work in the field of politics.

Her death came as a shock for nation. Sridevi was 54 when she died. The legendary actress passed away this year in February.  She died due to accidental drowning in a bathtub in Dubai.

The 41st President of US took his last breath on December 1, 2018.  He passed away at the age of 93 and his contribution in US Politics cannot be forgotten.

Rita Bhaduri died this year due to kidney infection. She took her last breath at the age of 62.  She was an integral part of Bollywood industry.

Read more: Christmas 2018: 10 Christmas Messages That You Can Send To Spread Happiness!

Kavi Kumar Azad aka Dr. Hathi died on July 9, 2018. The cause of death was heart attack. Kavi Kumar was 37 when he passed away.  The news came as a shock for the nation

He died on August 7, 2018 just a week before AtalBihari Vajpayee passed away. The cause of his death was organ failure.

Although these personalities are no more with us, but they will be always remembered for their incredible work.

10 things to change in your lifestyle once you turn 30

30 Millennial words that you should add in your dictionary