5 films of 2018 that proved content is the Real King

The year is going to end soon, and we must say a lot of things have happened this year. Talking about Bollywood films, 2018 was a wonderful year. This year there were so many good films in terms of content. Also, the industry is evolving and content has become the real boss. Here are 5 films of 2018 that have proved content is the real king. 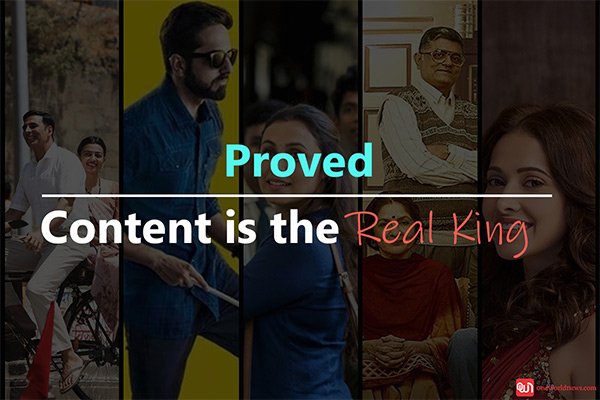 Ayushmann Khurranna starrer Badhai Ho dealt with a different type of content where a middle-aged couple who get pregnant. Indians need more content like this. Mainstream cinema is now actually taking up these issues, and we are really happy about it.

Padman was released in February and it was based on a real-life story. The talked about Periods, pads and problem associated with it. It was really needed in a country like India where women feel ashamed while talking about periods. The film starred Akshay Kumar, Sonam Kapoor, Radhika Apte

Read more: Movie Review : Fanney Khan Is A Story Of ‘Hopes And Dreams’

There were no bigwigs in this film but it turned out one of the blockbuster films of 2018. Kartik Aryan became everyone’s favourite after this film. The content was the real because a lot of people were able to relate to it. It was a light-hearted film.

Ayushmann Khurranna is a fabulous actor. The film Andhadhun went on to break of lot records on box office. It was one of the best films of Ayushmann. Above all when you have Radhika Apte and Tabu onboard can you expect anything less than a blast?

It was a slopper hit but its content was the king. Rani Mukherjee was her at best. She did a brilliant job
Have a news story, an interesting write-up or simply a suggestion? Write to us at
info@oneworldnews.in

Janpath VS Sarojini Nagar: Where to go shopping if you are New in Delhi?