The sorry state of affair, only 78 women judges out of 1079 judges in HC, Indian Judiciary has gender problems

Very recently, the Chief Justice of India, S A Bobde in The Supreme Court, said, “If you marry the girl you raped, we can help you. If not, if not, then you lose your job and go to jail” granting protection to a government employee who raped a 16- year – old minor. Well, such a statement is exclusively disgraceful and absurd. While this is one, there are uncountable statements that the people in authority in the authority position have passed, that are sexist, misogynist, or just weak on every ground of gender quality. And we can’t help but question why does this happen. Why a well-educated person, sitting in a position of authority and responsibility pass statements and judgments that are weak on the gender equality scale. This question takes us to the fact that in the Judicial system, there are only 2 women judges in SC, and only 78 women judges, out of 1079 judges in HC, which clearly shows that the Judiciary has gender problems. (A research by Smashboard, a New Delhi- and Paris-based non-profit that focuses on fighting sexism)

Well, It’s 2021, and India has not seen even a single woman becoming a CJI, and not only CJ, but the representation of women in the Indian Judicial System is also abysmally low, and their distribution in departments is even disappointing. Among all the observations made by the research, the most interesting are these three observations- 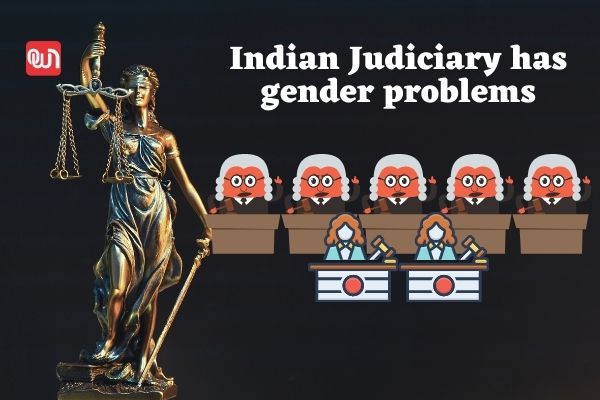 If these three observations are not surprising, then they are disappointing. Muslim women from the margin of an already marginalized community and for whom, the Muslim laws of divorce are already problematic, on that bench, there are no women. The second observation, that concerns the Justice Verma Committee of nine members is for formulating rape laws has just one woman out of nine members where women are the primary victims of rapes. Similarly, the third one, in the three-judge bench for sexual harassment at workplace guidelines, there is only one woman.

To outline a few more cases of foul judgments or poor language, here are a few examples

– During the recent rape case in Hathras, a former Supreme Court Judge, Markanday Katju shared a long post, which was an example where he subliminal justifies rape from men’s perspective. Phrases of his post include – ‘sex is a natural urge in men’.

Read more: Stigma about Divorce Makes Couples live Separately Instead of Getting Divorced. Why Does Society Moralize Divorce?

–  M.P. High Court asks the sexual harassment accused to request the victim to tie him ‘rakhi’ and promise to protect her “to the best of his ability for all times to come”.

– The Punjab and Haryana High Court granted bail to three former law students convicted for gangrape on the grounds of “promiscuous attitude and a voyeuristic mind“.

Well, these are a few examples to highlight the issue, the attempt to understand that the gender problem in the judiciary does lead to sexism and misogyny in the court’s judgments and statements.

It is a basic fact that we have been living in a patriarchal world, where, even if the male judges are gender-equal, the scope of subliminal discrimination can’t be ignored. The case here is like this – the community of oppressors gets to decide the punishment for the oppressor, the patriarchal/ masculine members get to decide the punishment for the patriarch/ toxic masculine. It is a not deniable fact that women can understand women and women issues in a much better way. Not that men can’t at all understand, but to empathize and with them in the right way, the barrier of gender and even subliminal sexism and discrimination should be removed. We need more women judges in Indian courts, who could understand and give better judgments on gender-based cases.

5 Affordable and Healthy Seeds for your everyday diet