The 1984 anti-Sikh riots, also known as the 1984 Sikh Massacre is a wound on people’s hearts which is incurable. The horrifying incidents happened partly due to the assassination of the then Prime Minister Indira Gandhi by her Sikh bodyguards. Indira Gandhi was assassinated due to her ordering a military attack on a group of revolutionaries demanding greater rights and autonomy of Punjab. The clash took place in the Harmandir complex in Amritsar which to the Sikh community was an attack on their religion.

Many believe and there’s some proof of the involvement of the Indian National Congress. And on 12th August of 2005, Manmohan Singh also apologized for the riots in Lok Sabha. The ‘anti-sikh’ riots as often mentioned was termed as ‘genocide’ by many countries and groups. The most affected places were Punjab, Bihar (Bokaro, now in Jharkhand) and Delhi. These places saw the ugliest of the riots where many many lives were lost.

The riots of 1984 was a highly publicized event. And in fact there have been several movies and series made on these riots. 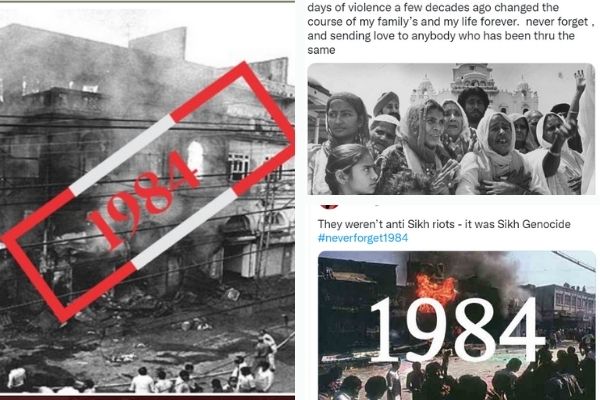 Came to know about #1984SikhGenocide after watching this film https://t.co/JvpKpFheCU

Anu, directed by Shonali Bose is based on her novel of the same name. The movie and book follows Amu‘s journey to a rural area of Delhi. Amu or Kajori is an Indian American who visits India. She especially feels drawn to a slum and keeps visiting there. It was later revealed that it was actually the place where her real parents were from and that she has been adopted. She also finds out how her parents died and about the tragic massacre of 1984. Secrets are revealed and she faces the truth about the tragic events.

The movie features Konkana Sen and Brinda Karat. The movie is ineligible to be telecasted on Indian Television and is available only on DVD.

Kaya Taran, directed by Sashi Kumar is a movie based on  Malayalam short story called ‘When Big Tree Falls’ by N. S. Madhavan. The movie is set against the backdrop of 1984 anti Sikh riots. The movie follows the events where a young Sikh woman is trying to hide from the rioters along with her 8 year old son. The duo finally get refuge in a convent where the little boy grows up.

The movie features Seema Biswas and Angad Bedi. The movie focuses on the characters’ acceptance of the events and how they move and make peace with the turn of events.

Punjab 1984 is a Punjabi period drama directed by Anurag Singh. The movie is set right at the heart of the 1984 massacre/riots. The movie depicts the story of a mother’s search for her missing son during the period of turmoil and terrorism in the north Indian state of Punjab in the 1980s. The movie focuses on the effect the riots had on people and their effects in daily lives of all the areas with Sikh population.

The movie features Diljit Dosanjh and Kirron Kher. The movie is available on all major platforms.

The movie 31st October is directed by Shivaji Lotan Patil. As the title suggests the movie is based on the events that followed the assassination of Indira Gandhi on 31st August 1984. The movie follows three men who need to travel across the town to get their Sikh friends’ family to safety. The movie describes in detail the horrors they witness.

The latest series on 1984 Sikh riots was highly applauded by the audience as well as the critics. The series released in June this year and showcased a beautiful love story – Jis Par Lga tha 84 Ka Grahan. It is available on Disney + Hotstar.